Est. Reading: 4 minutes
By far our favourite place to work and hangout in town would be Braamfontein. From Park Station to the ladies braiding hair along Smit Street, Braamies is our stomping ground, and here is why you should go check it out. 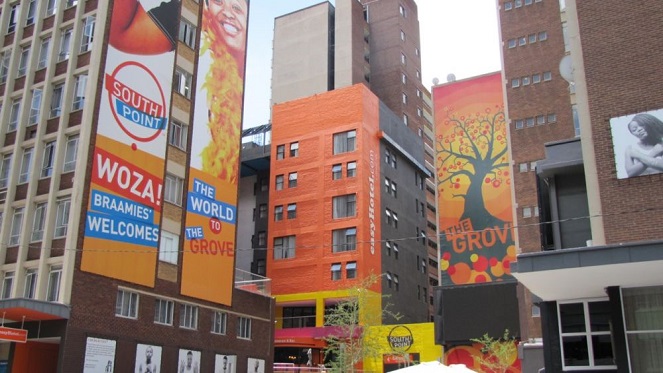 If you're looking for a decent dose of live music, poetry and craft market shopping, then good old Braamfontein is just for you. From its rich student life to its vibrant nightlife, there's a ton of stuff to see and do. But where did Braamies come from? To understand where it's going we need to know what started it all... well, that and it gives us a chance to flex our history knowledge muscles.

The 1850s was a rock 'n roll type of time in Johannesburg. The gold rush was peeking, industrial revolution started booming in town and farms were being sold left, right and centre to make way for new businesses. A big piece of land called Randjeslaagte was subdivided and sold off. One of these farms, Braamfontein, was then separated to form some of the cooler suburbs in town, like Parkhurst etc. The first of these suburbs was, you guessed it, Braamfontein, making it the oldest recognised suburb of the City Of Johannesburg. Because Braamfontein was the first to be developed as an appendage of the city, it grew in popularity fairly quickly. By the time the University of the Witwatersrand was founded in 1895 (then known as the South African School Of Mining), Braamfontein was already on the map for sport and leisure. But let's get down to the cool stuff before we put everyone to sleep...

Post can best be described as hipsters, old-school rock on vinyl and chilled vibes.Coffee is synonymous with breakfast, and you can get the best of both at Post. Its open-plan kitchen can be found right behind the counter and the guys working the register also work the grill, which makes for an interesting – and theatrical – morning. Don't be surprised to see the cook flip a bacon strip, take your order, pop you your change and turn around to scramble a few eggs. The menu changes quite often, giving you something new to try every time you visit, and the service and food are always top-notch.

What's in a name? At Love Food you get exactly that – food made with love. This joint across the road from the Wits Art Museum is a deli-style cafe where you can enjoy food that is freshly made every day. It’s a tasty, healthy and wholesome alternative to the traditional fast food and mass-produced supermarket ready-meals. We also have it on good authority that they make the best brownies in Joburg.

One of the coolest places to have breakfast in Braamfontein is at the Bannister Hotel... And there is a very good reason why we love it so much: breakfast is a choice from a set menu or a buffet and the coffee is bottomless. Yip, bottomless. The cool thing is you don't have to stay at the hotel to dig in at the restaurant downstairs.

As part of the WITS Art Museum (WAM), the WAM Cafe (actually called Olives & Plates, but nobody calls it that) serves buffet-style food throughout the day. It's filled to the brim with students, artists and art lovers from opening to closing. One of the awesome things about the WAM Cafe is that they serve freshly baked cakes that are so pretty that you can't help but Instagram all of them. Speaking of freshly baked, they also make lekker sandwiches that are perfect for those of us who don't have time to have a sit-down meal.

You can't go to Braamies without popping into 86 Public. Craft pizza is the name of the game here and they pull it off very well. From butternut and blue cheese on a beer base to prosciutto, Gorgonzola, pear and caramelised onions on sourdough, 86 Public knows how to combine flavours. It's no wonder they opened a branch in Illovo.

Joburg.co.za does not tolerate bigots or any form of racism. We suggest that Adam Catzavelos stay in Greece and that Joburgers enjoy a much better steak from Nesberth Nhambura at Wombles.

Every now and then we crave a good ol' rack of ribs, and the Smokehouse & Grill on Juta Street is where it's at. The flavour starts in the kitchen and ends on the last bite at this eat-in, sit-down Tex-Mex-style eatery. Their burgers are mouth-wateringly good, their beer ice cold and their desserts ready to be devoured. It's the kind of place you hit for after-work drinks with the mates and end up leaving well past midnight.

Live bands, cool DJs and a stocked bar. We've mentioned it a million times before – the Bannister Hotel is like a second home for us. If you get too tipsy you can always book yourself a lovely room upstairs (the prices are very decent). Check out their Facebook page for regular updates on what's happening at the Bannister. Take photos and tell us all about your party there.

Smooth jazz and great food are what attract people to The Orbit jazz lounge in Braamies. They have been known to entertain crowds with various underground and international acts. In fact, we'd go so far as to say that if an act performs at The Orbit, they will make massive waves in the jazz scene.

One of the oldest pubs in the city, Kitcheners serves great toasted sandwiches – and they throw one helluva party. As Kitcheners hosts live music, DJs and comedy shows almost every night of the week, your best bet to find out what's going down at this joint is to keep an eye on their Facebook page. If you've never partied in Braamies then Kitcheners is a great place to start.

Continuing on what we've said above: if you've never partied in Braamfontein before, then Great Dane is a great place to end. They open late and close early if you know what we mean. Some of the country's biggest music acts (think Die Antwoord) have performed here. On some nights there's a password to get in and the only way to get the password is to scour their Facebook page for it. Great Dane is owned by the same dude who ran Town Hall in Melville and owns Brian Lara's Rum Bar in Linden, so you know it's a good place to party.

Have you been to Braamfontein lately? Have we left out your favourite place? Then let us know in the comments section below. Also, sharing is caring, so throw this on social media for us. Thanks! Where To Find Food from Nigeria and Ghana in Johannesburg