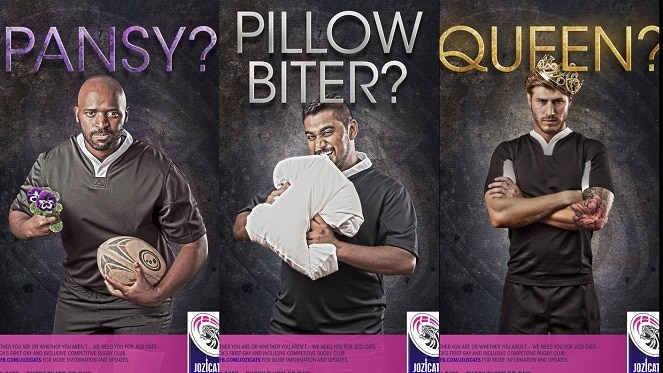 Founded on 20 August 2015, Africa's first gay rugby team began their journey with simple ideals of creating a safe and harassment-free environment for everyone to enjoy the game of rugby. This lead to the Jozi Cats building a competitive, social and diverse club which welcomes players with all levels of experience.

According to the rugby club's chairman, Chris Verrijdt, their approach is simple: anyone who shares and commits to their values is welcome to join the Jozi Cats Rugby Club. "We are one of the few clubs that cater for adult beginners or previously experienced players looking for some social or competitive touch or contact rugby," Chris tells us.

In February 2016, the club reached out to recruit new members and increase its visibility as a safe and welcoming environment for the LGBTQI* community. Havas PR, of which Chris is the head, devised a bold campaign to tackle homophobia in rugby and turn gay stereotypes inside out. It challenged the public by asking, “What does a gay rugby player look like?” and used the typical gay slurs one would hear on the sports field.

The Rugby, That’s so Gay global campaign launched on 4 May 2016 and went viral. It was viewed by over 350 million people in over 146 countries.

After this bold campaign, the rugby club was inundated with applications and the team grew from a handful of players to enough sign-ups to supply an entire tournament with manpower. Africa’s first gay rugby tour commenced in December 2016 and the Jozi Cats set their sights on shifting the conservative narrative of rugby in South Africa.

Over the last three years, Jozi Cats has constantly and consistently disrupted the local and global narrative on the sports field. They have won both on and off the field since inception and boast an impressive list of accomplishments:

But what does the future hold for the Jozi Cats? "We want to start playing more frequently as Jozi Cats in a league," says Chris. "Then we want to host our first international inclusive tournament at the end of next year with other clubs from the Southern Hemisphere, as well as keep on recruiting new members to grow the club." Needless to say, it's worth keeping an eye on this rugby club as they break barriers, smash stereotypes and grow the great sport of rugby.