An affluent suburb in the northern suburbs close to Midrand and the Mall of Africa, Kyalami is a playground for a variety of locals, including the horsey set. 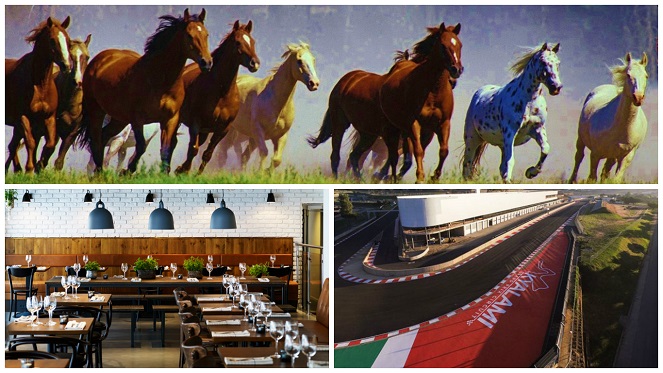 Heading north toward Midrand, Kyalami is a playground for those who enjoy picnics, walks in the park and, of course, the world-renowned racing circuit. The suburb is also known for a variety of restaurants, most of them at Kyalami Corner and the Kyalami Downs Shopping Centre.

One of these, Ristorante La Trinita, was featured in Time magazine as one of only two restaurants in South Africa which made it onto the list of their 100 Best Places to Eat in the World feature. Lala and Tessa are the proud and energetic owners who will welcome you with a hug by the second visit. Their melanzane is like no other. Order it! And the lasagne is to die for.

The South African Lipizzaners academy hosts magnificent performances every Sunday morning in their indoor hall which last an hour and are pure joy to behold. Refreshments and are available before and after the performance and tickets can be bought at the door. After each performance, the stables are open to the public and everyone is invited to feed the horses and enjoy a snack at Café Capriole.

Castle Kyalami can be seen on the ridge of this suburb and it was built by Greek millionaire and architect Demos Dinopoulos as his private home. He later sold his 8.9 ha estate to Planet Hotels which converted the castle into a spa, hotel, restaurant and wedding venue. Almost a decade after that, Planet Hotels sold the property to the South African Church Of Scientology and it is now a mission post. To the best of our knowledge, you can’t go hang out at the dining hall or poolside anymore but you can snap a couple of pics of the compound from a distance.

While in Kyalami, be sure to visit the Kyalami Grand Prix Circuit. This iconic venue hosted the Formula 1 Grand Prix during the 80s and 90s, and the Moto GP during the early 2000s. The property was snatched up on auction by Porsche South Africa for R205-million in 2014 and underwent an extensive refurbishment. The Kyalami Grand Prix Circuit now stages a variety of exciting events during the course of the year, so do yourself a favour and check out the events calendar on their website.