Est. Reading: 2 minutes
Visit Delta Park for a Parkrun, a picnic session, or a good walk with your best friend. 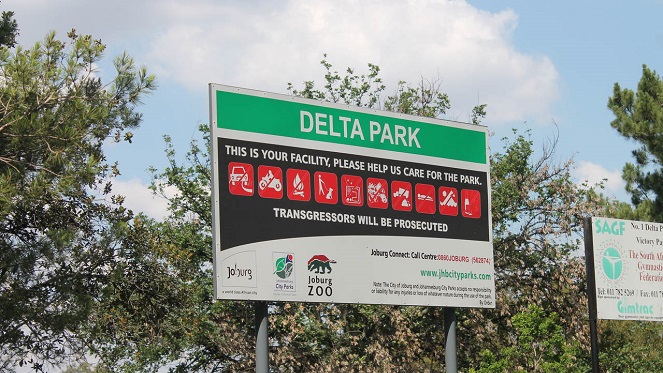 Tucked away on the cusp of Blairgowrie and Victory Park, about 10km north-west of the city centre, lies Delta Park, a peaceful and spacious area of some 104 hectares - one of the city’s biggest ‘green lungs’. Its long walking paths spread like veins across the plain's surface, trodden by weekend runners and horse riders. There are a number of benches placed around under shady trees, allowing visitors to lounge around. Delta Park is also pet-friendly and dogs don't need to be kept on a leash. A 7.5 hectare area has been enclosed and devoted to the Florence Bloom Bird Sanctuary, the oldest of its kind in the city. Originally formed in the late 1960’s it was re-established by the Witwatersrand Bird Club and the Bloom brothers – Harry, Norman and David. When re- opened in 1975,  the Florence Bloom Bird Sanctuary was named after their mother. Bird hides, with wheelchair access, have been built at the two dams; on the far side of the plot, a confusion of guinea fowl can be spotted. The dams have attracted various ducks, coots, moorhens and other water birds, as well as the odd kingfisher; the open veld sections attract bishops and weavers, guinea fowl and francolin, and the areas of denser bush attract birds such as Willow Warblers, Great Reed-Warblers, and Tawny-flanked Prinias, Sparrowhawks and Owls. The park also seems to regularly attract highly unusual species and in the past seven years Madagascar Cuckoo, Long-tailed Pipit, and Ayres Hawk-Eagle, amongst others, have been recorded. Other special features within the park are the Sasol Sensory Trail and the Rand Water Water Wise Garden. The imaginative Sensory Trail was opened in 1997 and is intended to assist people, including the physically challenged, to appreciate aspects of nature which do not first come to mind, such as texture, temperature, aroma and shape. The Water Wise Garden is designed to comprise many different, mainly indigenous plants, grouped according to their water requirements.

The Park also houses the Scouts and Girl Guides, as well as the Delta Environmental Centre which aims to enable people to improve their environment by promoting the management and sustainable use of all resources. Their website has the most information about the Park itself as well as good directions and a map. There is a colourful and active children’s area, and clean toilets. Pack your running shoes and head to Delta Park for a Parkrun every Saturday morning at 08:00.