The festive season is back all too soon. The kids are on an extended school break and will need to be entertained all month long. To get in the festive spirit and get in some much-needed family bonding, why not have an old school movie night? Grab a bowl of popcorn and a homemade slushy and plop on the couch for these must watch classic Christmas movies. 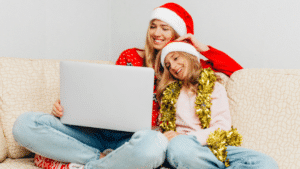 This 1990 comedy follows the story of the McCallister family. On the night before a trip to Paris, the McCallister boys get into a fight and ruin the family dinner. Kevin McCallister is sent to the attic as punishment. He spends the night wishing that his family would disappear. The following morning, the McCallisters head to the airport, accidentally leaving Kevin behind. Kevin is overjoyed with his freedom. But, the young boy soon starts missing his family when he has to take care of himself. Hearing two criminals planning a burglary at his house, Kevin sets booby traps throughout the house to dispel the petty thieves. The ensuing drama will leave the family in stitches.

The Nightmare Before Christmas

Tim Burton’s The Nightmare Before Christmas is a stop-motion animated fantasy film from 1993. Often considered a Halloween movie, this animation makes a great Christmas time treat, too. It follows the story of Jack Skellington, the “Pumpkin King” of Halloween Town. The resident ghosts, ghouls, zombies, mummies, vampires and monsters of the town all look to Jack for leadership. Despite this, Jack’s only friend is his dog, Zero. Tiring of the town’s antics, Jack and Zero go in search of something more. This journey leads Jack to discover several other towns, including Christmas Town. Enthralled by all the magic of Christmas Town, Jack devises a plan to take over Christmas but his attempts go horridly awry. In the end, Jack must learn to accept who he is, a task aided by his new found love, Sally.

How The Grinch Stole Christmas

This film is based on the 1957 book of the same name, written by popular children’s author, Dr Seuss. Taking place in Whoville, the story follows The Grinch – the only resident of the fictional town that hates Christmas. The Grinch is a genius inventor who uses his inventions to play vindictive pranks on the other residents of Whoville. One day, a little girl, Cindy Lou Who, discovers Grinch’s tragic past. Cindy tries to envoke the spirit of Christmas in The Grinch but her plan in thwarted by a resentful Maywho, Grinch’s childhood bully. Grinch lashes out at Whoville, trying his best to ruin Christmas. When he realises that the spirit of Christmas can’t be destroyed, after stealing the town’s gifts, decorations and food, he finds a little Christmas cheer of his own.

Released in 2018, this fantasy film stars the likes of Mackenzie Foy, Keira Knightley, Helen Mirren and Morgan Freeman. Based on the short story by E.T.A Hoffmann, the film follows the Stahlbaum family. On Christmas Eve, Clara Stahlbaum receives an egg shaped box from her late mother. Unable to open it, she asks her godfather and skilled inventor, Drosselmeyer, for help. He gives her the key, which is stolen by a mouse. Trying to retrieve it, Clara enters a magical world. She soon discovers that her mother had created this world and that it is up to Clara to save it from evil forces seeking power of the realm. After her adventures, Clara learns the true meaning of family and believing in yourself. This is a wonderful Christmas treat for the whole family.

Rise Of The Guardians

The Rise Of The Guardians not only makes a great Christmas time treat, but is a wonderful movie to enjoy year round. The story follows Jack Frost, a winter spirit who uses his staff to create winter fun for people around the world. Jack is inducted as a Guardian, a group of powerful spirits who protect little children and bring them joy. Jack, along with the rest of the Guardians, Nicholas St. North (Santa Claus), E. Aster Bunnymund (The Easter Bunny), Sandy (The Sandman) and Tooth (The Tooth Fairy) attempt to stop Pitch Black (The Boogeyman) from threatening the children of the world with his nightmares. But first, Jack needs to learn to believe in himself.

Elliot: The Littlest Reindeer is the ultimate movie for the whole family. From Grandma and Grandpa to the little children, everyone will love this adorable film. Days before Santa is due to make his round-the-world trip on Christmas Eve, one of the reindeers, Blitzen, announces his retirement. When Santa and his elves hold try-outs for Blitzen’s replacement, Elliot has his chance to make his lifelong dream come true. There’s only one problem – Elliot is a miniature horse and not a reindeer. Watch as the littlest reindeer tries his best to overcome the obstacles standing in his way of fulfilling his dreams.

What’s your favourite family Christmas movie? Let us know about it in the comments section below!

Christmas With The Kids Is Sorted At Sunrise Sweet Market

Sun-Shiny Sweetness Sunrise Sweet Market has been operating as a family business since 1969. Located in the heart of City......