Home » Welcome To The Troyeville Hotel

Welcome To The Troyeville Hotel

Est. Reading: 2 minutes
Have you ever been to the Troyeville Hotel? Nope? Well, here are a couple of reasons why you should go check it out this weekend. 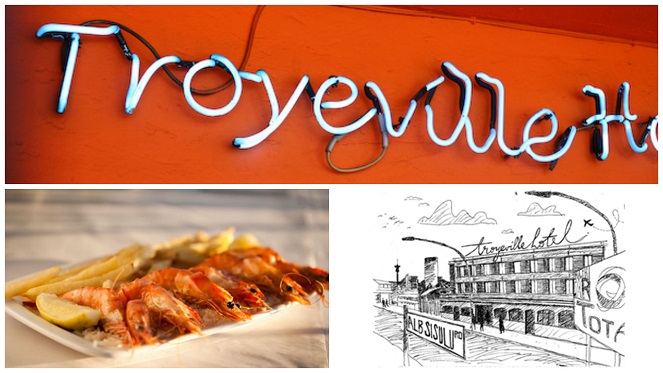 One of the coolest places on earth can not be found in a little village in Europe or the deepest jungles of South America. Nope. A stone's throw to the south of the city stands the Troyeville Hotel - the coolest place on earth.

This hotel, first licensed in 1939, is a Johannesburg original. Serving unfussy, award-winning Portuguese cuisine, it’s been the hangout for artists, musicians, political activists, sports fans-  and Robbie Brozin and his crew of Nando's fame - for generations. The restaurant features consistently in lists of the best places to eat in Johannesburg. The hotel's regular book evenings have become a fixture of the city's cultural life, attracting "everyone from strip club owners to cabinet ministers."

It has become known especially for its signature dish, the LM Prawns. And that is why we've travelled all the way to good old Troyeville...  The menu sings Fado and excites the taste buds much like a gorgeous singer tantelises the emotions. There's everything from rump trinchado to espetadas as big as your arm. And the prices! The prices are amazing. You won't find this kind of value for money anywhere else in the city. Forget about the supposed "dodgy drive" through town and do yourself a favour and check out the Troyeville Hotel for yourself. It's a melting pot of young and old, rich and poor, Portuguese and not so Portuguese. The locals hang around the bar and over weekends the restaurant is packed to the brim. There is a very good reason why this place is as famous as it is, and it's something you need to experience for yourself. Troyeville and neighbouring Kensington is actually really charming and different. Just try it once and see for yourself.

Have you been to the Troyeville Hotel? It's a pretty legit place. Let us know what you think of it in the comments section below. Share this article with friends on social media and you could win the affection of the journalist who wrote it.

5 comments on “Welcome To The Troyeville Hotel”