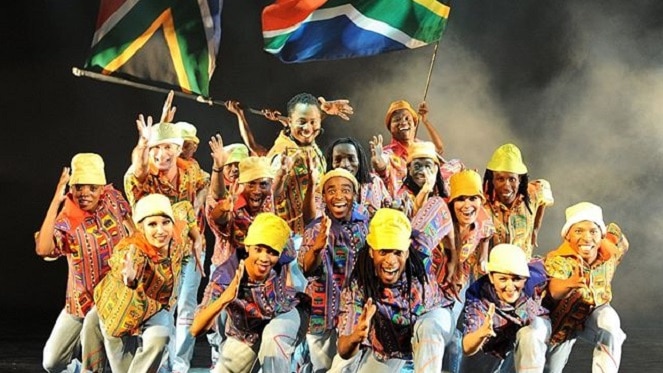 Theatres have been shut since mid-March as South Africa battles the novel coronavirus. In response, the arts community at large has turned to online platforms to share their work with theatre lovers in lockdown. &Scene is one such platform - a new live streaming series, created for the entertainment industry by the entertainment industry. Described as a "watering hole" for creatives, this platform provides a much-needed virtual space for performers, directors, writers and producers to engage with each other. However, you do not need to be an industry big-wig to join in on the fun. &Scene is a place where artists and amateurs meet to chat, share and reminiscence about all things theatre.

Since April 2020, &Scene has been streaming the weekly Together Again series, bringing together the casts and crews of some of South Africa's most successful stage productions over the last two decades. So far we've tuned in for the 20th anniversary celebration of African Footprint, the 2007 productions of Rent and Hairspray, and the 10th anniversary edition of Mamma Mia! Each Saturday in lockdown, a new Together Again live streaming showcase has gone live from &Scene's Facebook Live page and YouTube channel. Now to celebrate the end of its first season, &Scene is ending things with a bang, hosting the cast and crew of the 2013 production of Jersey Boys!

Jersey Boys tells the real-life story of how four poverty-line kids from the wrong side of the tracks became one of the greatest successes in pop music history. The Four Seasons: Frankie Valli, Bob Gaudio, Tommy DeVito and Nick Massi wrote their own songs, invented their own sounds and sold 175 million records globally – all before they were thirty! The unique sounds of Frankie Valli and the Four Seasons have been covered by many of today's pop artists, proving the diverse appeal and appreciation of this music as it lives on through the generations.

Jersey Boys weaves a tale about friendships, hardships, fights and the success resulting from a New Jersey "handshake". Members of the creative team and cast of the 2013 South African hit production will reunite in studio for a night of fun, memories and a nostalgic reminder of those unforgettable Frankie Valli and The Four Seasons hits. Joining the host, David Bloch, in the virtual studio will be Richard Hester, Jonathan Smith and Maye-E Wong, live from New York, while Danny Austin joins from Alberta, Canada. South African producer, Hazel Feldman will be in studio as well. Cast members will include Grant Almirall, Daniel Buys, Emmanuel Castis, Kenneth Meyer, Jaco Van Rensburg, Taryn Hudson, Carmen Pretorius and Kirsten Murphy.

Following the run-away success of &Scene's Together Again series, the platform debuted their 'Spotlight On' feature. Hosted by award-winning actress and theatre veteran, Kate Normington, Spotlight On shines a light on South African performers living abroad and "making it big". If you've ever been interested in what it takes to carve out an international career in the performing arts, this series is for you. It offers insightful industry tips and tricks, as well as deeply personal stories from some of the country's most successful performers.

Spotlight On episodes go live on Wednesdays on &Scene's Facebook Live page and YouTube Channel. You can send in questions for each week's guest on http://www.andscene.live/spotlighton.

Waiting In The Wings

&Scene is run totally off of your donations, which goes towards helping artists in need and keeping the industry alive until theatres can reopen. While their online content is free to watch, you can donate to Waiting In The Wings SA - an initiative which provides immediate support to freelance entertainers who have fallen on hard times due to the current crisis. Even the smallest contribution goes a long way, so please consider giving back a little to those who have been keeping us entertained and enlightened with their creative work during lockdown. Make your donation via the &Scene website.

&Scene also presents live morning yoga and zen pilates classes to help keep you fit in lockdown, plus a number of children's entertainment shows and workshops throughout the day. If your little one is a budding performer, let them join in on the fun. It's a great way to keep them entertained and out of your hair while you attend to work or household chores. Find the full &Scene weekly streaming schedule here.

Visit www.andscene.live for more information and updates on &Scene's weekly live streaming schedule. You can also follow them on social media for the latest news: