Home » The Leonardo Towers Over Sandton

The Leonardo Towers Over Sandton

Est. Reading: 2 minutes
Standing a whopping 234 meters above Maude Street, The Leonardo will be the tallest building in Africa, boasting all-inclusive living for its tenants, complete with a kindergarten, spa, shopping centre and deli... not to mention a R250 million penthouse at the top. 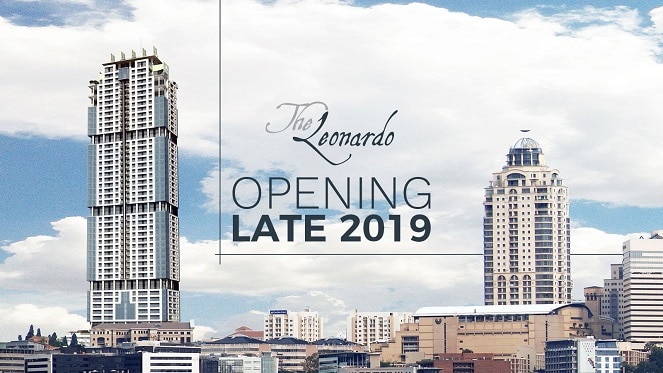 Rising 234 meters above Maude Street, The Leonardo is the epitome of modern engineering. Crowned as the tallest skyscraper on the African continent by the Council of Tall Buildings and Urban Habitat (CTBUH) International, The Leonardo is a joint venture between Legacy Hotels and Nedbank CIB. The Leonardo will only hold its title as the tallest building in Africa until the completion of the Pinnacle Tower, which will stand 300 meters tall in the Kenyan capital of Nairobi. Design of The Leonardo was driven by principles of sustainable development. Interior designers Steven Falcke and Varoom, tasked to create Africa′s ultimate living experience, embraced the latest in technology and energy-efficient luxury living in the sky. The Mixed Use Leonardo

The Leonardo plays house to retail tenants on the ground floor as well as The Leonardo Lounge, Bar and Deli Kitchen and the Leonardo Conference Centre three floors up. Level 7 acts as centre stage to the building’s recreational facilities which include Aurum Restaurant, Nature & Nurture Montessori Pre-School, an outdoor pool and deck with a gym and spa, five daybeds and the wood-fired meal offering, Octo Bar. Hosted by Legacy Group CEO and Chairman Bart Dorrestein, the tour culminated on the roof of the 55-storey building, at the soon-to-be-opened sky bar, Alto234 with unobstructed 360-degree views of the city of gold.

Rising above this is the tower itself, with premium-grade offices on the lower section of the tower, with the upper section purposed for residential apartments. The 7 top floors accommodate 8 duplex penthouse suites with the building crowned by the 3 level, 360° view "Leonardo Suite”. Measuring 3000 m², 1900m² under roof and 1100m² of garden area, “The Leonardo Suite” is the most sought-after home in Africa and has redefined the opulent sophistication of modern African luxury lifestyle living. Food & Drink At The Leonardo

Level 3 includes the aforementioned Leo’s Lounge, Bar and Deli Kitchen for freshly prepared deli and convenience meals available throughout the day, with Octo Bar and Aurum Restaurant on the 7th floor.

Aurum is a 250 pax capacity eating destination with dining capacity on the Aurum Terrace. The menu is a contemporary interpretation of Modern European Cuisine with a casual, all-day offering for breakfast, brunch and lunch and high-end dining for dinner. Selected food and wine pairings will also be hosted on a weekly basis to showcase the sommelier selection in its Wine Library. The structure is topped off by a viewing platform and future Sky Bar with 360° views of the Johannesburg skyline. The Leonardo Spa consists of five treatment rooms, one of which will be a double room for couple therapies, four pedicure stations, two manicure stations as well as a hair studio. In addition to the traditional spa menu which includes facials, body treatments and pregnancy massage therapies, there is a Medical Aesthetics offering. The Greg Norman Championship Golf Course At Eye of Africa