Vegan food has always been strange and uncharted territory for most … well, that was until the Fussy Vegan arrived. Whether or not you support the cause, we’re imploring that you try them out. 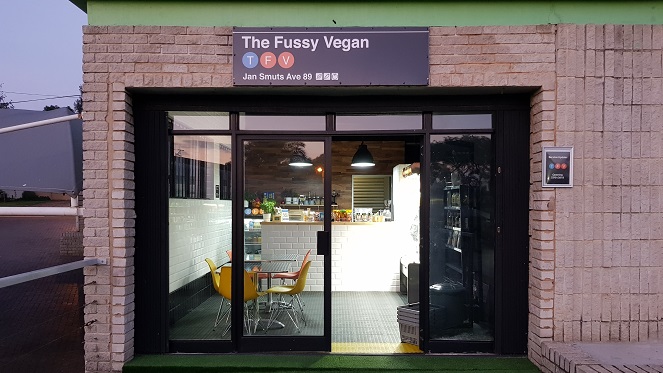 Jokes like “what is the Native American word for a vegan? Bad Hunter!” was cool when we were 15 years old. Now, it’s just silly. Giggles aside, we’re headed straight to flavour town (sorry, Guy Fieri you’re not coming with), so buckle up and sit tight – you’re in for a treat. We’re headed to one of our new favourite vegan places in Joburg.

What started out as a dietary change, soon turned into a lifestyle and eventually a business for the self-taught chef and owner Werner Prinsloo when The Fussy Vegan opened its doors on 21 January 2018. Werner noticed that there was a gap in the market for good vegan food on the go. “There are only so many times you can eat plain salted Lays,” Werner jokes. The gap in the market Werner is referring to is vegan fast food. The type of stuff that you grab at a petrol station on your way to work … but better. With that said, this hidden vegan gem does not slap a sandwich together and send you on your way. Nope. The aim here is what Werner calls “slow fast food”. The Fussy Vegan sets out to create meals stuffed with attention to detail.  An example of this would be my absolute favourite menu item, the toasted tofu mayo and bacon sandwich. Wait, what? Bacon? Yeah, vegan bacon. It’s made from something called seitan – a wheat gluten meat substitute dating back to 6th century China.

Werner is a bit of a mad scientist in the kitchen and enjoys experimenting with different ingredients. Patrons can expect dishes such as mushroom risottos, mac ‘n cheese, shiitake lasagna, and a variety of other comfort foods. Not to mention a display of ready-made sandwiches packed in biodegradable packaging; the BLT and Tofu Mayo are some of the best sellers and are so delicious even carnivores love them. Other favourites include the Breakfast Burrito, Philly Cheese Steak roll and the Pulled Mushroom Sandwich that are so good that you don’t even miss the meat and dairy. The Fussy Vegan has also recently started making the much anticipated Beyond Meat Burger; a veggie burger that looks, smells and tastes like the real thing.

The Fussy vegan is well priced for the freshness that you get. In fact, for the price of a chicken mayo wrap at Woolies, you can buy a toasted sandwich and a cupcake at the Fussy Vegan.

The Fussy Vegan also sells pressed fruit and veg juices, vegan kefir, kombucha, vegan cheeses, yogurts and butter to name but a few … oh! And vegan biltong! To boot, Werner’s right-hand man, Dave Sampson is a rock star when it comes to brewing a cup of coffee that uses almond milk to create rich and creamy cappuccinos. You can also get a bottle of the best macadamia and almond nut iced coffee, sold in a glass bottle. The Fussy Vegan also acts as a mini convenience store for vegans, stocking cooking and cleaning products, toiletries, as well as glass straws and bamboo toothbrushes which have no impact on the environment.

All in all, if you’re not a vegan or a vegetarian (and you’re like me who just loves food), then do yourself a favour and stop by the Fussy Vegan – you won’t be sorry. The service is great, the dudes are friendly and the food is off the charts. Be warned though, the toasted BLT sandwich can get you hooked. Also, there is a daily lunchtime rush so either pop in before or after regular lunch hours. Pro tip: If there is a lunchtime rush at an eatery then it means the food is good.

Can I tell you a vegan joke? I promise it won’t be cheesy …

The Great Mind Behind Katu Vellies

Jono Dangoumou is a bright young lad from the West Rand who's making waves in the local SME scene. We......