Est. Reading: 2 minutes
If you're into shooting games, you'll never look at them in the same way once you try out this ultra realistic laser tag in Randburg... it's amazing. 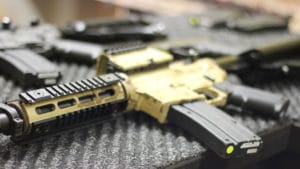 If you're a fan of first-person shooter games, you’ve probably been bunkered down in a dark room somewhere for the past 10 years playing Counter-Strike, Call of Duty or Battlefield. But if you're looking for a real military simulation, and you're yearning for something that takes more than rapidly tapping the R button on your keyboard, we have just the thing for you.

Put on your pants, soldier up and head down to Black Ops Advanced Tactical Laser Tag in Strijdom Park, Randburg. It’s so close to actual firefights in war zones that the South African Armed Forces and other private security firms make use of the Black Ops warehouse to train their legions. What started out as a Sunday afternoon conversation between Black Ops founder Avinash “The General” Nair and his cousin (over a gaming session, of course) soon turned into a leading laser tag facility. Avinash travelled to Australia, the UK and America to do research on this project to ensure the most realistic experience was offered for all users. It was in Wisconsin, America, where he met an ex-Navy SEAL who introduced him to the system that Black Ops is now known for. Since Black Ops opened its doors in September 2016, the company has had thousands of people walk through its doors.

As the only laser tag arena of its kind in Africa, Black Ops is at the forefront of something big. Not only is it 90 minutes of hardcore adrenaline pumping action, but the events have been designed in such a way that they enforce team building and trust between players.

As Avinash puts it, there’s no way someone can bust into a game and just Rambo his or her team to victory. Because of this, Black Ops has come highly recommended as a company that specialises in team building exercises outside of a corporate environment. The weapons themselves are replicas of actual automatic and semi-automatic rifles and sidearms used by the American Special Forces, complete with realistic recoil when the trigger is pulled. To make the experience even more realistic, you can choose to wear a belt that discharges five thousand volts of electricity each time you get shot – this is optional, of course. Different scenarios are played off, such as hostage rescue, breach and clear, and bomb deactivation.

Once a month, Black Ops also hosts a zombie event in which actors take to the arena and players need to try and survive without being infected. Don’t know about you but that sounds like our cup of tea… yes, please. And all this for R350? Trust me, it’s worth it. You’ll become a regular and never see Call of Duty the same again. Top 10 Things To Do In Joburg When It’s Raining Spooky Halloween Fun For All In Joburg – 2021 Have A Blast At These Paintball Ranges In Johannesburg