Est. Reading: 5 minutes
Source and cost – the two biggest driving forces. That’s according to Chef James Diack, South Africa’s pioneer of provenance and recent recipient of the SASSI Trailblazer Award for 2018. At a recent trend insights event, James provided insight into some of the top sustainable eating trends for 2019 and how they’re not only shaping what’s on your plate, but how much you pay for it. 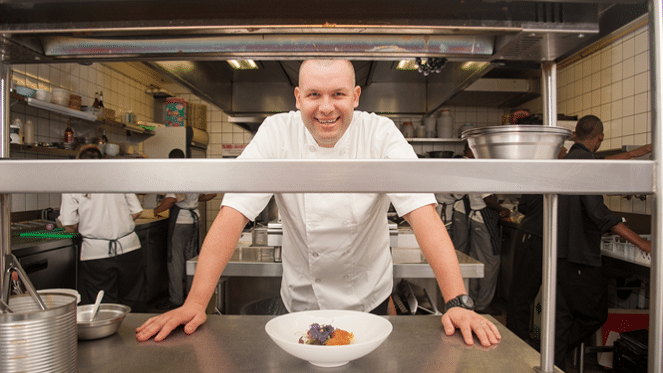 Provenance has always been at the core of James Diack's passion and his business. It’s what has created his day to day and sustains almost 120 jobs under his Brightside Group. It delivers incredible meals to hundreds of customers every day. Knowing where the food and wine come from that James serves in his restaurants is paramount, and this is becoming more and more prominent in today’s society. food trends

But what’s also prominent for both consumers and restaurateurs alike is the spiralling cost of food. This amalgamation of rising costs across the board and genuine concern for the source of food will see a combination of trends emerging in 2019. How we can be smarter about our food — knowing where it comes from and how it was farmed — will ensure that we work smarter with our money.

To elaborate on this, we sat down with the king of farm-to-table restaurateuring to discuss and forecast global food trends and their impact on local kitchens.

Katsu (cutlet in Japanese) refers to various cuts (often the cheaper cuts) of meat that have been pounded really thin before cooking. The meat, usually pork or chicken, is seasoned, dredged in flour and egg, and then breadcrumbed. It’s growing in popularity in the States – similar to how the taco trend started – and now it's here too.

Across the globe, demand for cheaper cuts of pork sees almost 3 million pigs slaughtered each year – most of whom are intensively reared, antibiotic-laden and stressed from living in confined conditions. As social animals, pigs should spend the day roaming in the sun, grazing and rooting the ground, or wallowing in the mud to cool down. However, over 1.5 billion pigs slaughtered for meat worldwide each year don’t get the opportunity to wallow.

Katsu has shone a light on this issue to some degree; people are starting to pay more attention to what cut is being used, where the animal was farmed and what it was fed — similar to how the growth in the Wagyu beef variant started. The increase in wheat and gluten allergies has sent some shock waves through the local restaurant industry and around the world. To keep up, chefs are having to seek out alternative grains to replace traditional wheat products. Think pearl barley, quinoa, farro and steel-cut oats. Alternative grains are great for pasta-type dishes, salads and even for making crumbs.

Using the whole plant reduces food waste and reduces costs. A year ago, a kilogram of lemons cost around R35 per kilo, now you’re looking at over R100 per kilo. Food prices are not showing a natural progression but rather a sharp increase and you can’t afford to waste a thing.

Citrus fruits like lemons and oranges can be used for the zest one day and juiced the next. Carrot tops can be baked for a garnish or ground into a green pesto. The same concept applies to proteins – using all parts of an animal when cooking – yes, even the offal.

The current world economic climate is putting everyone’s pockets under pressure. The biggest issue for restaurant-owners is how to prevent the spiralling cost of rent and staffing from impacting food costs – and ultimately what the consumer will pay. Sourcing fish inland and from responsibly-farmed sources is not only more sustainable but more cost-effective.

The South African Sustainable Seafood Initiative's (SASSI’s) 'Green, Orange, Red' guide is not only helping consumers make better seafood choices but chefs too. Responsible restaurants should only feature green-listed fish on their menus but they also need to further scrutinise the source, how it was caught or how it was farmed. It’s also more economical to use fish from local sources.

Using local freshwater farmed trout to replace imported Scottish or Norwegian means less import and transport costs. The local version has all the qualities of imported salmon but it’s fresher, we can get it more frequently and it works out at a quarter of the cost.

Aquaculture has even made advances to grow freshwater crayfish, adding it to the food trends watch list for 2019. The redclaw freshwater crayfish, native to Australia, is available from a limited number of suppliers in South Africa, including some small community initiatives in Mpumalanga. One of the biggest threats to midweek dining in the US, Europe and Australia right now is food boxes – the buying or delivery of either pre-made meals or the ingredients to prepare the meals at home. The uptake of this, even in South Africa, is largely due to the misconception that it's cheaper and simpler, but it’s not. People also feel some restaurant dishes are overcomplicated and prices are inflated. The reality is, food boxes generally work out to R120 to R130 per serving, often more than you would pay in a restaurant. And that excludes a beverage.

So, in response, restaurants are including simpler dishes on their menus. Yes, some are designed as a culinary spoil but there are also everyday meals that are special, simple and well-priced. A great bowl of pasta or steak and chips with a quality glass of wine can be well-priced. And, it doesn’t come out of a box. One of the more interesting food trends to arrive on the global culinary stage is vegetables as dessert. A move to sweet and sour combinations has led chefs to seek out alternatives and vegetables, such a beetroot, are doing the trick. When cooked down, beetroot becomes beautifully sweet and really versatile. James is using beetroot in a white chocolate dessert in the form of ice cream, served with dark rum jelly and a stone fruit sponge. He's even using the leaves for garnish. Hand in hand with global food trends is technological advancements in other fields, such as wine. Consumers want to drink great wine by the glass but often the bottle is too expensive to open for just one customer. Enter the Coravin wine preservation system. James uses this for some of his more expensive wines – it pours wine without removing the cork from the bottle, thus preserving it. People who don't want to buy a bottle can now enjoy a glass. And a bottle of expensive wine can now be opened and kept for up to three months. To grab a taste of the latest food trends to hit the Joburg dining scene, head to James Diack's Coobs on 4th Avenue, Parkhurst or spend some time at his latest restaurant, Douglas + Hale just up the road in Parktown North. There's Something For Everyone At The Gourmet Grocer