Keeping a reasonable distance from the sticky-sweet pastries at Patisserie de Paris was far from easy. Barely able to stop myself from face-planting into a glossy pecan tart, or hurtling in the direction of a selection of French cheeses, I found a table outside. Beneath a tight throng of brightly coloured umbrellas, I took a moment. There’s definitely something cosmopolitan about this quirky ode to Paris, which has managed to thrive on a rather bland suburban road. 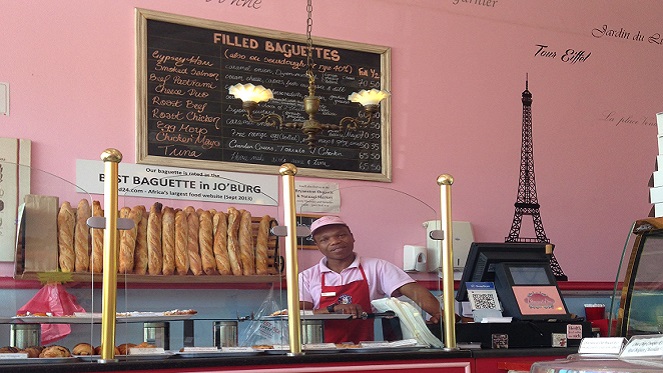 The owner, Paul, studied classic French cuisine in the south of France. Fancy. He’s big on sourcing top-quality ingredients and crafting artisan breads. I am such a push-over when it comes to homemade bread, so I decided to try a filled baguette – I’m sensible like that. It’s been rated the best baguette in Johannesburg, so I was curious to see if it lived up to all the hype.

While I waited, I sipped on strawberry juice and pinched some lavender from a little wooden crate. Cheesy French music put a smile on my face, as did snippets of the conversation taking place two tables away from me. Blairgowrie moms can gossip like nobody’s business. My baguette arrived in good time, laden with smoked Norwegian salmon, cream cheese, capers, cucumber, and dill. The baguette itself was delicious and incredibly chewy (I’m assuming the French like it this way – no complaints from my side either). The ingredients, the salmon especially, were fresh.

The menu also boasts a French-bistro-style croque monsieur (basically a posh cheese toastie), as well as a burger topped with camembert and preserved fig. Once you’ve filled up on proper food, you’ll have the strength to go inside and eyeball the cake selection.

Was I charmed? Quite. Was I happy with my meal? Certainly. Am I going to return to Patisserie de Paris at some point with a little wheelbarrow to relieve Paul of his pastries and cheeses? Oui.

BlackSteer Is Back In Town

BlackSteer Is Back One of South Africa's most iconic heritage brands, BlackSteer, is making a comeback and we approve. The......