Shawn Greyling takes the limited edition Ford Ranger FX4 around Joburg for a spin… and is now reluctant to return the car to the media warehouse! 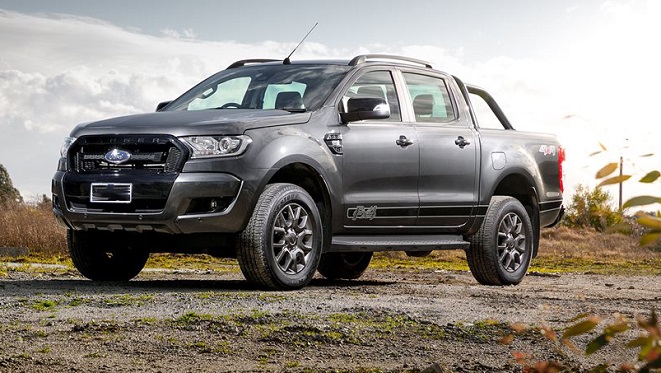 Paying attention to consumer demands and style patterns, Ford has one-upped “modders” of their Ranger bakkies by throwing all of the cool toys into the pot. The limited edition Ford Ranger FX4 comes stock standard with all the things buyers would add when ticking the long list of extras when ordering a Ranger out of the box. Based on the 3.2-litre XLT Double Cab 4×4, the Ford Ranger FX4 features black finishes for the front grille, roof rails, side-mirror caps, fog lamp bezels, door and tailgate handles. The buck does not stop there – not by a long shot. The 17″ alloy wheels comes out in a colour Ford likes to call “Panther Black”, which aids in the ultimate ride height and feel that makes the Ford Ranger FX4 a fun drive. This monstrous machine of engineering perfection comes out in four colours: Frozen White, Moondust Silver, Sea Grey and Panther Black. 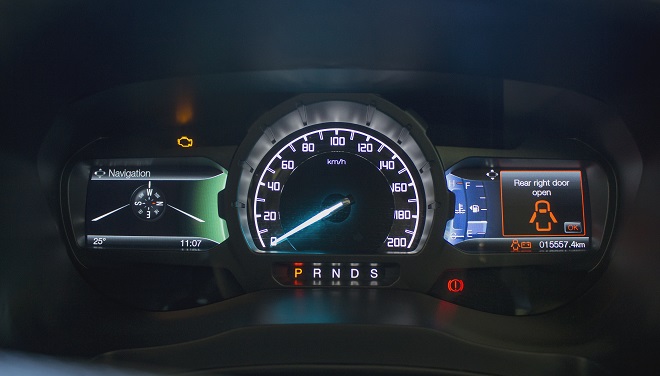 The Ford Ranger FX4 is a beast to look at and the bakkie’s sheer size can be daunting to any driver. Sticking to Ranger stature, this special rendition of a hot classic is a breeze to drive, though the wheels like to output more torque on the tarmac than my 2009 Honda Jazz revving foot is used to (I’ve managed to unintentionally drift this thing around more corners than I’d care to admit). 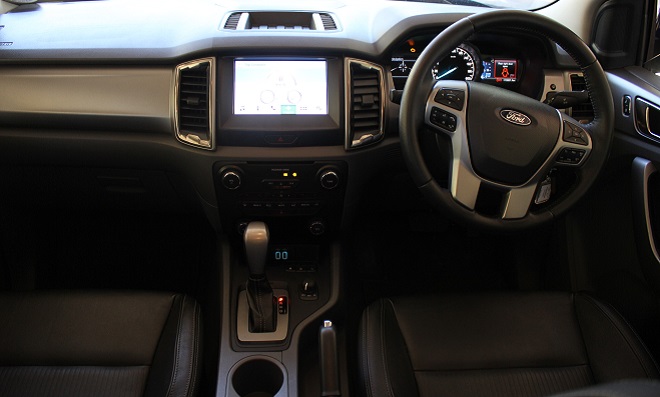 It’s a 4×4, right? Right. I took a drive out to Randfontein and managed to make my way out towards the old mine dumps. Sneaking past a handful of fenced-off encampments filled with mine workers and prospectors, I hightailed down a winding road. In between massive dunes, it was finally time to switch from regular old rear-wheel drive into 4H mode. The steering became stronger, the torque was evenly distributed, and taking a gravel-clad corner at a decent speed lead to me having more fun than I get paid to have. The FX4’s front-roll lock helps with climbing down steep embankments and the simple press of a button next to the automatic gear lever locks the diffs in place, allowing for an easy exit uphill or over uneven and tricky terrain. Though I would have enjoyed taking the thing on a legitimate off-road track, the opportunity did not present itself. 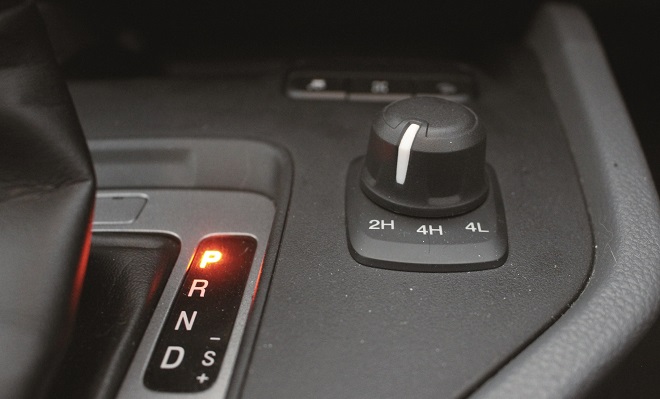 Minuscule. I honestly had to fish to find something bad about the Ford Ranger FX4. It’s the little things that keep most cars from scoring a solid 100 in most critics’ books… Then again, I earn my wages by being picky. Let’s start picking then. The indicators. This is something Ford has never gotten right for me. Though the cancellation after taking a corner is much better than the Fiesta ST 200 or the EcoSport, it’s a bit too good. To put it simply, the indicators like to cancel just as I am about to change lanes or on the verge of taking a corner. Joburg does not need another motorist who doesn’t use their indicators – albeit unintentional. 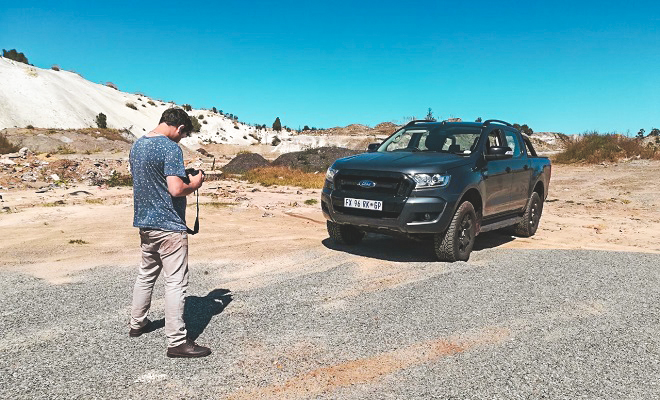 Who needs a tent when you have a Ford Ranger FX4? The bakkie’s interior is the kind of place I wouldn’t mind turning into my own little bedroom for a couple of days. Creature comforts do not even begin to explain the space and coziness. The Fx4 benefits from the latest Sync 3 system; complete with Android Auto, Apple Car Play and navigation. I tried to figure out a way to install the original Doom game on the Sync 3 but chickened out when it actually looked like it could actually work. The Sync 3’s user-friendly system is a big plus and the fact that you can micro-manage the climate control through its touch screen soothes the “climatic” OCD I suffer from. As for hauling a load, I put the bakkie through its paces after buying 852 kgs of books for R250 (not even joking) and loaded it on the back and in the cab. The bakkie took it like a champ, though the loading space on the back is limited because of the cab. 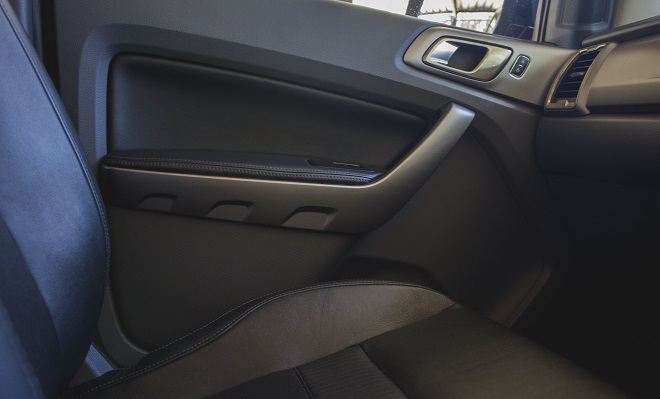 Seeing as this is the fully kitted version of the doner Ranger model, you can expect black leather seats trimmed with double stitching for an added flair, durable plastic finishes, and enough back-cab room to set up tent if you ever get stuck in Joburg traffic for a couple of days. But why should Joburgers drive a 4×4 diesel drinking machine? Let’s do a little list to convince you: 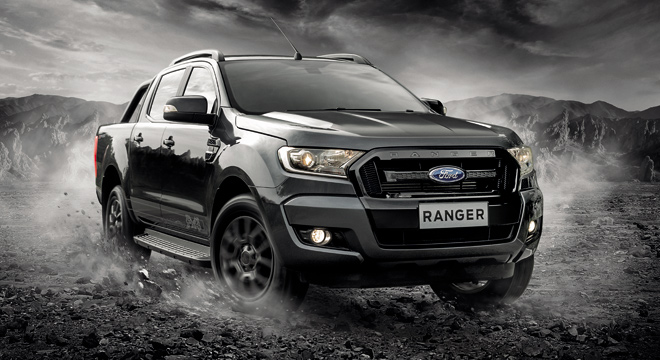 Whenever I test a car, people often ask if I’d buy it. Most of the time I’d say nope but in this instance… R609 000 is a bargain for what you get. It has more power than the top-of-the-line VW Amarok, it looks better and performs better than the Toyota Hilux Black, and handles better than whatever Mitsubishi is bringing to the table these days. And if anyone out there wants to disagree, I implore them to invite me for a beer and some biltong, because I am sold on this machine.

What Is It? Let's get the party started at the Beerhouse Glow Party. Join in on Monday for the baddest,......