You’ve probably heard and seen her name making headlines in the art and media world. From joining forces with luxury car brand BMW to collaborating with the late former president Nelson Mandela, traditional artist Esther Mahlangu (81) is one of our country’s most treasured creative gems. 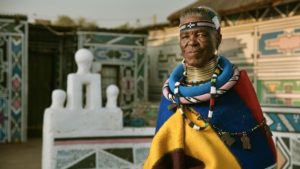 Esther Mahlangu‘s initial collaboration with BMW was in 1991, where she was asked to paint a BMW Art Car. 25 years later, the company commissioned the artist to paint the interior panels of a BMW Individual 7 Series, with the one-of-a-kind car going up for auction at the Frieze Art Fair in London in October 2017.

Talk about great things coming together. Thomas Girst, an art historian, author, and Head of Cultural Engagement at BMW, says BMW’s decision to commission Esther was because of her ability to blend the traditional with modern, making her now-recognised Ndebele contribution to contemporary art.

Esther’s first car – following a lineage that includes Andy Warhol, Alexander Calder, Frank Stella, Roy Lichtenstein, Robert Rauschenberg, and many other well-known male artists of the Western canon – has done a lot to keep the history and magnitude of Ndebele painting alive.

Traditionally, Ndebele paintings were done to signify momentous life events such as births, deaths, initiations, or weddings. Esther grew up watching her mother and grandmother painting their home according to relevant life events.

The colours and patterns used in the more current Ndebele prints started around the 1940s when Esther was growing up. She began painting on canvas but soon realised that not everyone would be able to see Ndebele paintings, and she worried that they would eventually die out and only be remembered in history books and museums. This prompted Esther to begin approaching galleries and museums with her work, actively promoting the art form. 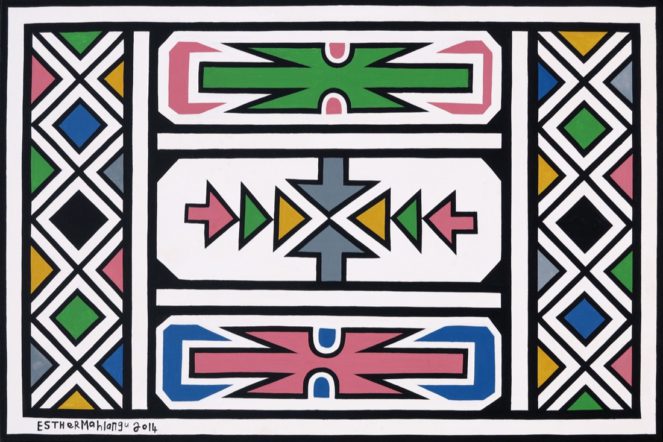 Looking at a completed artwork by Esther you would think that she uses preliminary drawings and lines in her paintings. But, in an article by Marina Cashdan, we learn that the 81-year-old possesses “superhuman precision and uses a delicate chicken feather as her brush. She applies thick black lines in patterns that echo Ndebele beadwork but in paint, then adds swathes of rich colour.”

With the kind of magnitude and relevance such an artist brings to herself and our country, it’s no surprise that in 2004 she collaborated with the late former president Nelson Mandela. Working from drawings Mandela had done, Esther embellished the prints using the traditional Ndebele style for which is globally renowned. Six stunning paintings were created from this glorious collaboration and exhibited at The Melrose Gallery, which Esther was reported as saying was “her most memorable collaboration

To learn more about Esther Mahlangu or see more of her amazing paintings, visit here.

Images sourced from artsy.net and The Melrose Gallery.

What Is It? We think  this is a great way to spend your weekend. We think you should definitely get......