Est. Reading: 4 minutes
Some of the hottest shows and movies are coming to screens near you! Why not use our nifty guide to figure out what you should be watching? 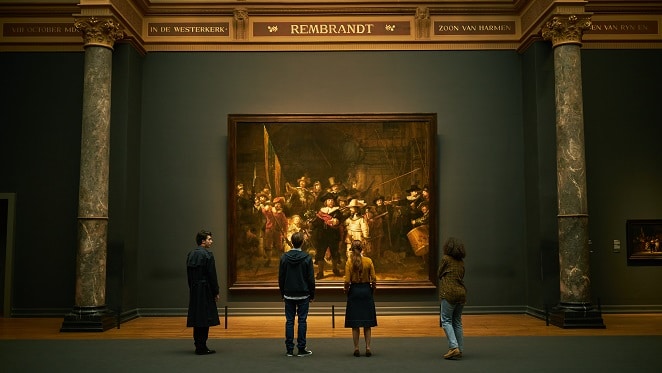 In Grace and Frankie, Jane Fonda (“Grace”) and Lily Tomlin (“Frankie”) star as two women whose lives are suddenly turned upside down when their husbands reveal they are gay and leave them for each other. Both sparring partners and partners-in-crime, they form an unlikely bond to face an uncertain future together and discover a new definition of “family,” with laughter, tears and plenty of mood enhancers along the way.

The eight episode psychological horror series enters the world of Ares, a secret student society in the heart of Amsterdam where best friends, Rosa and Jacob, surrender to a world of wealth and power. But slowly they start to realize they’ve entered a demonic place, built on secrets from The Netherlands’ past. It's a place where true power comes at a terrible price.

Chilling Adventures of Sabrina re-imagines the origin and adventures of Sabrina the Teenage Witch as a dark coming-of-age story that traffics in horror, the occult and, of course, witchcraft. Part Three finds Sabrina reeling from the harrowing events of Part Two. Though she defeated her father, Lucifer, the Dark Lord remains trapped within the human prison of her beloved boyfriend, Nicholas Scratch.

Telling the story of Freddie Quell (Phoenix), a World War II Navy veteran struggling to adjust to a post-war society, who meets Lancaster Dodd (Hoffman), a leader of a religious movement known as "The Cause". Dodd sees something in Quell and accepts him into the movement. Quell takes a liking to "The Cause", and begins traveling with Dodd's family along the East Coast to spread his teachings.

In the 1840s, New York is a mess of gangs all fighting over small areas of turf. The main rivalry is between the immigrant Irish and those who see themselves as Natives of New York. A battle rages between them and the leader of the Irish, Priest Vallon, falls to the blade of Bill "The Butcher" Cutting, witnessed by Vallon's young son. Sixteen years later and things are different but no better. Cutting is now the head of the Five Corners and all the gangs answer to him. It is into this situation that an unknown man, called Amsterdam, returns and is none other than the grown son of Priest Vallon. Seeking a fitting revenge for the death of his father, Amsterdam makes sure he catches Cutting's sole eye and gradually is taken into his trust.

Six criminals, hired to steal diamonds, do not know each other's true identity. While attempting the heist, the police ambushes them, leading them to believe that one of them is an undercover officer.

Well into the second generation of a grand televangelist tradition, the world-famous Gemstone family is living proof that worship pays dividends in all sizes. Patriarch Eli, the man most responsible for the tremendous success of the family's megachurch, is in mourning over the loss of his wife. Jesse, the eldest of the three grown Gemstone siblings, looks to lead in his father's footsteps, but finds his past sins jeopardizing the family ministry.

At the height of the First World War, two young British soldiers, Schofield (Captain Fantastic’s George MacKay) and Blake (Game of Thrones’ Dean-Charles Chapman) are given a seemingly impossible mission. In a race against time, they must cross enemy territory and deliver a message that will stop a deadly attack on hundreds of soldiers — Blake’s own brother among them.

Laurent, also known as Pento, joins the crime squad in the Seine-Saint-Denis. Later, he develops distinctive methods to solve crimes while working with two colleagues.

When Gretchen Carlson slaps Fox News founder Roger Ailes with a lawsuit alleging sexual harassment, not a soul could predict what would happen next. Her decision leads to Fox News correspondent Megyn Kelly coming forward with her own story, as well as multiple other women, inciting a movement that reverberates around the world.

Based on real events, from visionary writer-director Terrence Malick, A Hidden Life is the story of an unsung hero, Franz Jägerstätter, who refused to fight for the Nazis in World War II. When the Austrian peasant farmer is faced with the threat of execution for treason, it is his unwavering faith and his love for his wife and children that keeps his spirit alive.