Orphee Karaj Irung’s short film, Watumwa will make its official premiere at Joburg Theatre this July. The film questions how we turn a blind eye to human trafficking on the African continent. Can you walk away? Find out on Saturday, 13 July 2019. You won’t want to miss it. 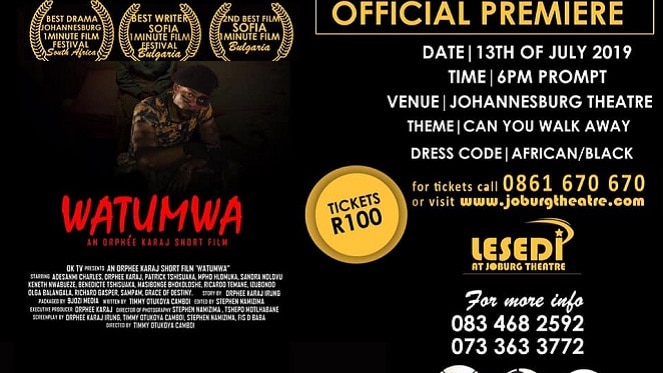 The multi-award winning short film, Watumwa is coming to Joburg Theatre this July.  Human trafficking is one of Africa’s most pressing issues. It is also the fastest growing business of organized crime on the continent. Watumwa is an awareness short film, shedding light on this relevant issue. Congolese film producer Orphee Karaj Irung teamed up with Nigerian film director and screenwriter Timmy Otukoya for the film.

Watumwa means “bondage” in Swahili. As such, the film provides an educational look into the unforeseen carelessness that leads to human trafficking in most cases in Africa. The project, inspired by the occurrence of the Libya slave trade in 2017, as well as other real-life happenings and researches, saw filmmakers across Africa volunteering to be part of the voices against human trafficking.

Watumwa has won numerous awards, including Best Drama at the Johannesburg 1 Minute Film Festival. Dress in African attire or full black, as the theme for the evening is, can you walk away? Don’t miss the official premiere of this highly informative film. Tickets are limited, so get yours as soon as possible!

Tickets cost R100 per person and may be purchased online via Webtickets.

What Is It? God is a Woman - join Art Affair in celebrating African womanhood this Women's Month in Alexandra.......