Est. Reading: 4 minutes
The Metropolitan Opera House in New York is renowned for its grandeur and modern yet classic repertoire. To help keep you entertained in lockdown, they've debuted a new weekly live streaming series - Live in HD. Don't miss out on this week's spectacular lineup of shows. 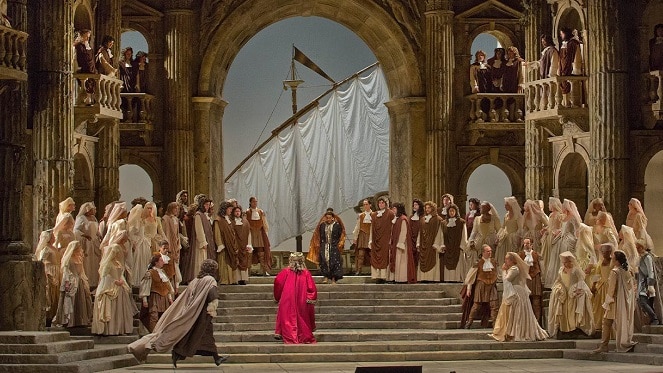 Let's Meet At The Met!

The Metropolitan Opera was founded in 1883 in New York. When its first home on Broadway and 39th Street became too small to accommodate its grand productions, the Met relocated to the Lincoln Center for the Performing Arts. Since 1966, this has been the opera's home in New York, equipped with the finest technical facilities. It is these facilities combined with the Met's ever enduring spirit which has allowed it to continue to thrive even as the popularity of opera has seen rapid decline. The Met stages over 200 productions per year, welcoming over 800 000 visitors each season.

In 2006, the Metropolitan Opera introduced their Live in HD series to audiences around the world - a series of performance transmissions shown live in high definition in movie theaters around the globe. Today, this series reaches more than 2000 venues in 73 countries across six continents. However, due to the COVID-19 pandemic and worldwide movie theatre closures, the Met's live shows and transmission broadcasts look likely to be halted until December 2020.

In response to the global pandemic crisis, the Metropolitan Opera has yet again turned to technological advances to bring their shows to the world. Since late March, they have been offering free nightly live streams of their most popular productions via their website. The streams are also available through the Met Opera on Demand apps for Apple, Amazon and Roku devices and Samsung Smart TV.

The nightly Met Opera streams kick off at 19:30 EDT, until 18:30 the following day. Seeing that Johannesburg is six hours ahead of New York, this translates to 01:30 in the morning for us! Of course, if you are still awake at that time, go right ahead. But, for those of us working from home or with young children, it may be best to get your fill of world-class opera later on in the day. Click here to watch last night's stream before it ends!

The Met enters it's thirteenth week of live online streaming from Monday, 08 June 2020. With its physical theatre facing closure for another few months, they will be continuing with the Live in HD series throughout June 2020. Here's what's on the Met: Live in HD programme for the next few weeks: Visit the Metropolitan Opera website for more information. You can also follow their social media pages to keep up to date with the latest news:

Click here for the Met's weekly guide to their Live in HD shows, complete with original playbills and insightful 'behind-the-curtain' pieces. The Linden Market: Autumn Edition Is Coming, Make A Date! Neighbourgoods Market Revived As The Playground The Alternative City Guide To Johannesburg