Where It All Began

Mike Page, now General Manager of Montecasino, was with the property while it was still under construction, in the finance department. He recalls looking out over “the massive canyon”, that would transform into the constantly changing and evolving world-class entertainment destination it is today. He, together with three other staff members who have together been with Montecasino for a total of just over 50 years, reflect on what makes Montecasino one of Gauteng’s favourite places to be.

Who Are These Four Individuals? 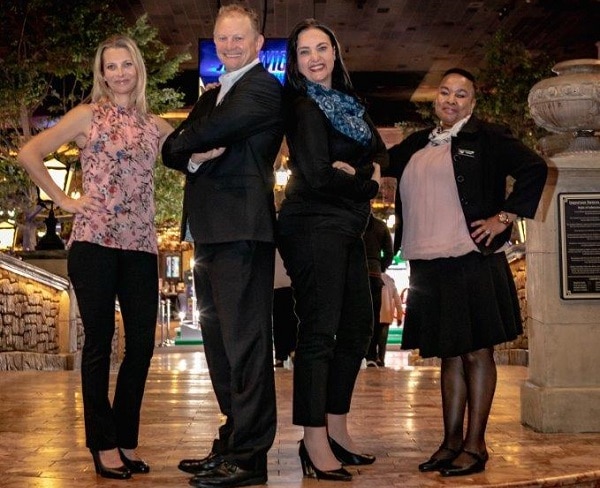 Q: What are your favourite early memories of Montecasino?

“It was so fresh and new, bursting at the seams and unique in its Italianness. The attention to detail was impeccable and it was exciting watching it all come alive”, said Mike Page. Priding herself with being of the staff that educated the public about Montecasino’s Italian theme, Tshidi Moroane says they had a mock-up building and they showed guests the experience and texture of a Tuscany Village. Saying it was new for everyone. Later, in 2010 when it was the 2010 Soccer World Cup, Nelson Mandela went to SunSquare as a surprise to the public. And she says she marks that day as the most memorable experiences of her life and it was there at Montecasino.

Mike says, fundamentally it’s the might of Montecasino, saying that it is rare to get this amount of investment into one property. The scale is huge and covers all facts, with three hotels, theatres, 40 restaurants, 15 cinemas, and more. Stating that this is the only place where you get this level of choice. They also state that Montecasino is a unique entertainment destination with unusual offerings that create talking points among visitors. The also acknowledge the continual buzz, Montecasino truly never sleeps. Montecasino caters for everyone, from kids to adults, the safety and security of guests is a top priority, and we strive to create a magical experience for every guest.

Q: What are your favourite things about Montecasino?

Page says, Jasmine – in early summer, an abundance of flowers, gardens with lemon trees at the Palazzo, the massive doors at the west entrance, the enrgy of the people. Specifically the restaurant owners, engaging with their guests on a Friday night. Julia Pollecutt says, hers has to be The Tuscan streets, the family vibe, the Montecasino Bird Garden with its tranquil environment and beautiful walkaways, and restaurant hopping.

Q: What difference has Montecasino made to the local community?

They say that Montecasino is very committed to their community and are involved in a number of initiatives that include; investment in the Diepsloot Safe-Hub, which provides local children with a safe environment for facilitating sports, arts, life skills lessons, and personal development, the Witkoppen School where they have planted food trees and donated a fence, a local park and many more. They also state that they are involved in a lot of CSI activities that support the local community such as career guidance and mentoring for high school learners, sponsorship, Mandela Day activities, CANSA Shavathons, book collections, and more.

Q: What are your major learnings in your career at Montecasino?

“I started at Montecasino in May 2008 as an Event Producer and I knew that Montecasino was where I needed to grow and be. Working for events for a business that operates 24/7 is not for the faint-hearted – it’s a way of life. To succeed, you need to learn to integrate your work life and your personal life, and at the end of the day, hard work and dedication pay off. I am still here, loving my job and I wouldn’t change a thing!”, says Lauren Small.