This one is for all car fanatics. This automotive festival brings an exciting weekend filled with amazing displays and exhibitions. There will be tons of entertainment including customised rides, car competitions, amazing car gear and so much more. Don’t forget to bring your wallet... you might shop till you drop too.

Tickets are R 50 - R 395 per person and are available at TicketPro.

Former child prodigy, George Benson, first hit the musical scene in the '60s playing soul jazz with Jack McDuff and many others. His 1974 release Bad Benson climbed to the top of the Billboard jazz charts. But his 1976 release LP Breezin sprung his career into new heights, and became the first jazz album to be certified platinum, which later went triple platinum.

George Benson went on to recording his 1980 breakthrough pop album Give Me The Night which charted in the pop/RnB top 10. Over his career, he has won 10 Grammy Awards as well as received a star on the Hollywood Walk of Fame. Don’t miss him live, up close and personal, in Johannesburg, featuring all of his massive hits including Give Me The Night, Turn Your Love Around, The Greatest Love Of All, Nothing’s Going to Change My Love, Breezin, This Masquarade and many more. 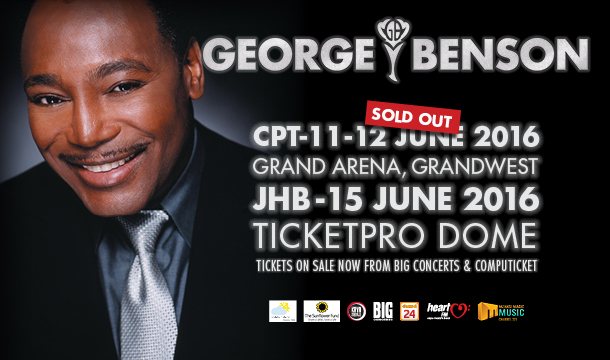 Tickets cost between R400 and R740 per person and are available at Computicket and Big Concert’s website.

For more information about Big Concerts and other concerts they will bringing to SA, visit www.bigconcerts.co.za.