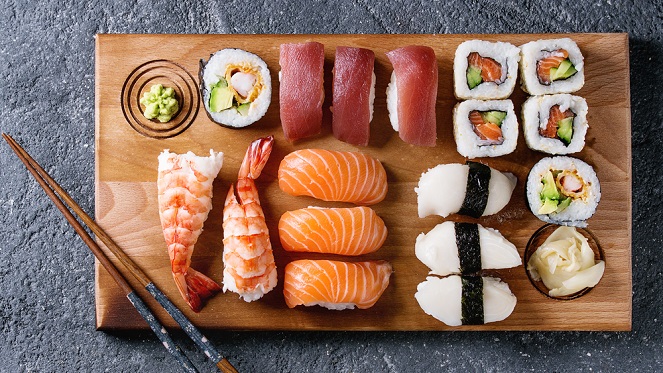 FireRoom Sushi & Grill For one of the most delicious and theatrical sushi experiences you'll find in the city, head to the FireRoom Sushi & Grill at Montecasino. It's a must for your foodie bucket list. As for meetings and date nights, hell yeah, it's a must-do for sure. They prepare and serve sushi like […] 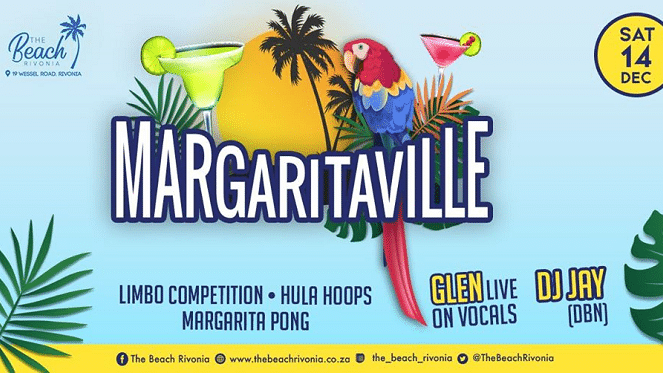 What Is It? Time for an epic party, Joburg! Margarita-ville is here and ready to have fun. The day and evening will be filled with exciting activities so gather some friends and go have an epic time. Margarita-ville is bringing amazing entertainment and vibe. Don't miss out! When Is It? Saturday, 14 December 2019 at […] 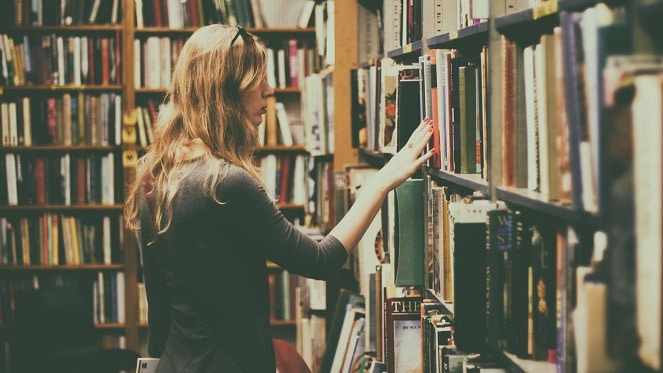 Bookdealers - 30 Years Worth of Collectibles  Bookdealers has a verified passion for collecting unique book editions, graphic novels, biographies and non-fiction titles. For over thirty years, they have been bringing Joburg book lovers the best collectible and used books. What started out as one quirky store in Yeoville, has grown to five stores scattered […] 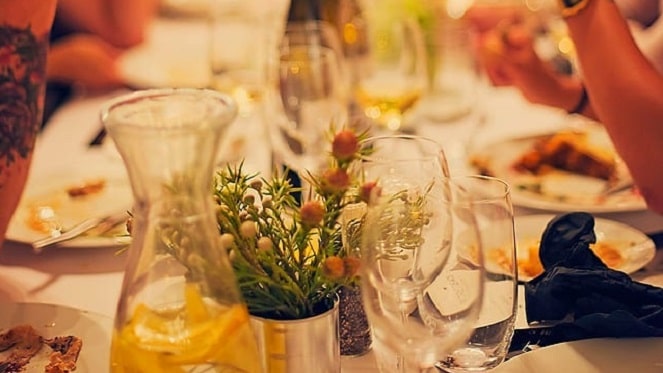 What Is It? Secret Eats was launched in 2013 in Cape Town. Their mission was to bring food lovers together for one-of-a-kind dining experiences. They have since expanded to Johannesburg and globally to Vietnam. The Secret Eats brand work tirelessly to pair top chefs and rising culinary stars with curious and outgoing food lovers. Their […]

Read More
Anyone Going To The Dino Kids Play Arena In Sandton?
Kim Brown
No Comments 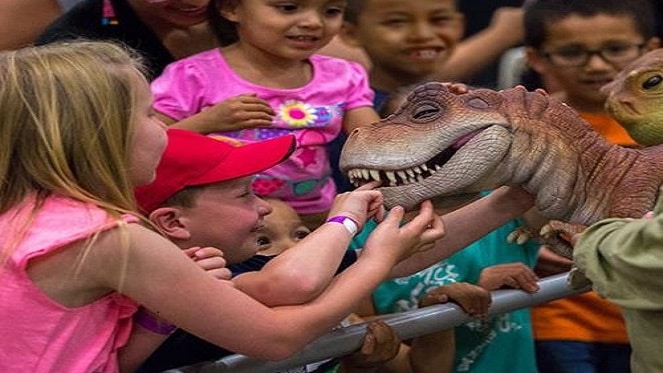 The Dino Expo Brings More Fun For The Kids We all know and love The Dino Expo that has   visited more that 22 cities and towns around the country, right? It has literally been a Dino Roadshow for many years, delighting both young and old with life-sized replicas of the prehistoric terrors and creatures […] 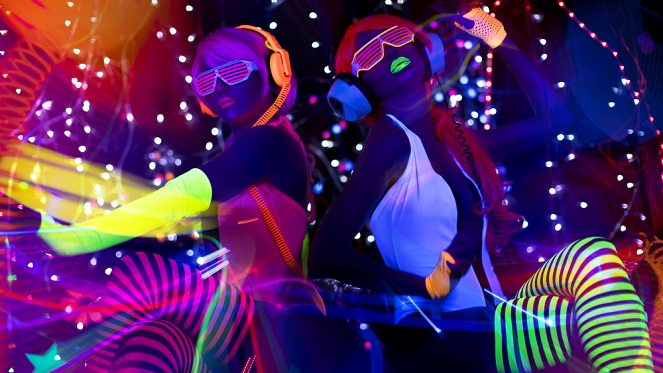 What Is It? Go to Madison Avenue Rivonia for a New Years Eve under the stars and moonlight glow at their Ultra Violet Circus New Year's Eve. The venue will be transformed into the perfect space for the celebration. There will be indoor and outdooer stages where more than 8 of SA's top DJs will […] 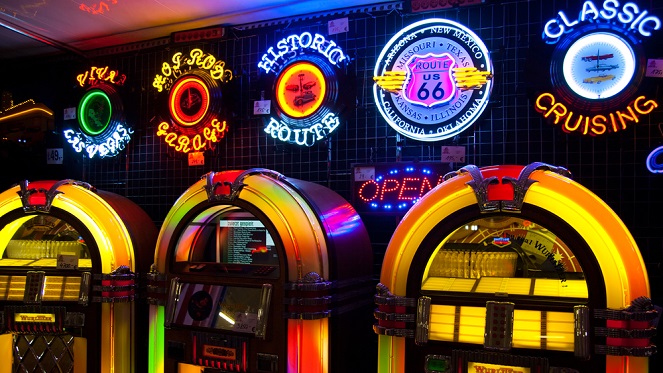 What Is It? You know that really cool road trip playlist of Rock 'n Roll music? Well, Blaze of Glory is all that on steroids! The show features an eight member rocking cast performing songs made for the open road. It pays tribute to rock legends like Bon Jovi, Creedence Clearwater Revival, The Doobie Brothers, The […] 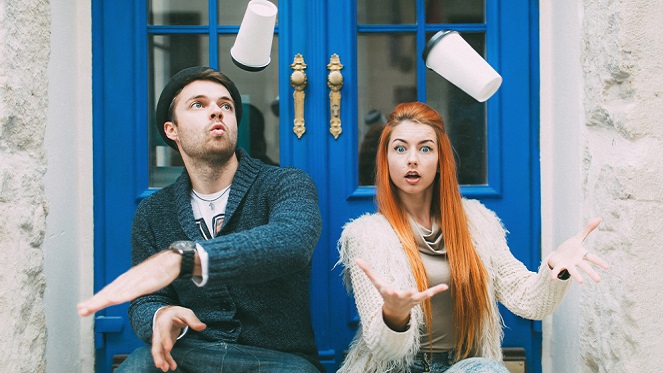 The Grind Coffee Co. Situated in a cycle shop in Melrose Arch, the Grind Coffee Co. is the inventor of the "most Instagrammed coffee in the world" - the coffee in a cone. Owner and master barista, Daine, spent years formulating a chocolate recipe that could be used to coat the inside of sugar ice-cream […] 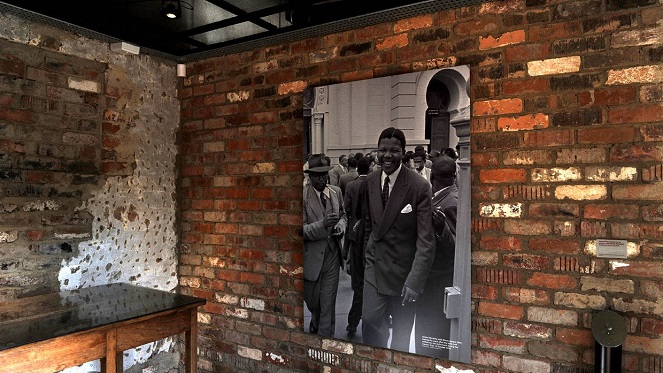 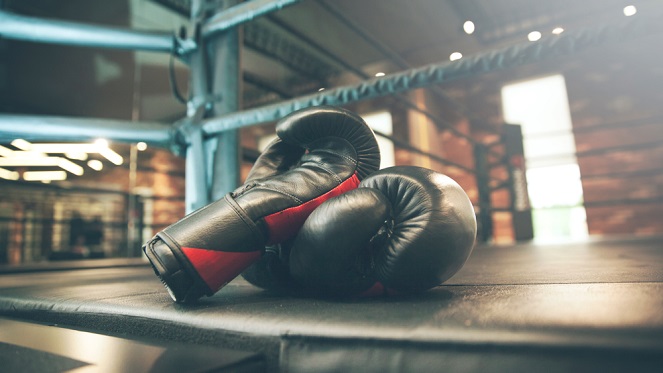 What Is It? Then, get to experience the adrenaline and watch the match live. Gather a group of your friends and head to this event. Buy tickets for a table and get the chance to indulge in delicious food whilst being entertained. Indulge in some amazing bottles of vodka,tequila, champagne and 10 boerewors rolls or […]

Read More
Where To Go On Your Babymoon!
Kim Brown
No Comments 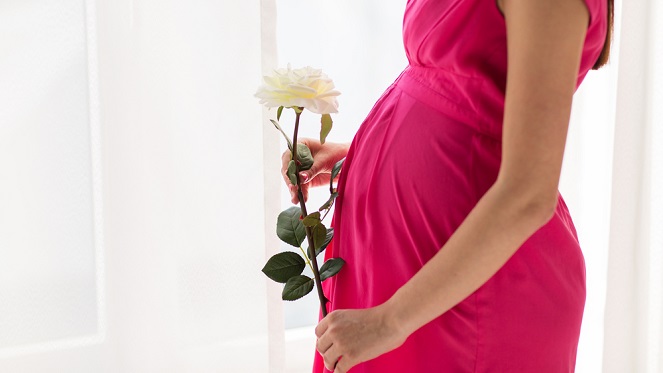 For those of you who have never heard this term before (like us singletons and those without children yet), here is the definition of a babymoon: "Babymoon" (ba·by·moon   ˈbā-bē-ˌmün) Noun. Informal. A relaxing or romantic holiday taken by parents-to-be before their baby is born. So, essentially it's just like a honeymoon, except you enjoy this special […]

Read More
We Have Discovered The Best Fudge In The City!
Kim Brown
No Comments 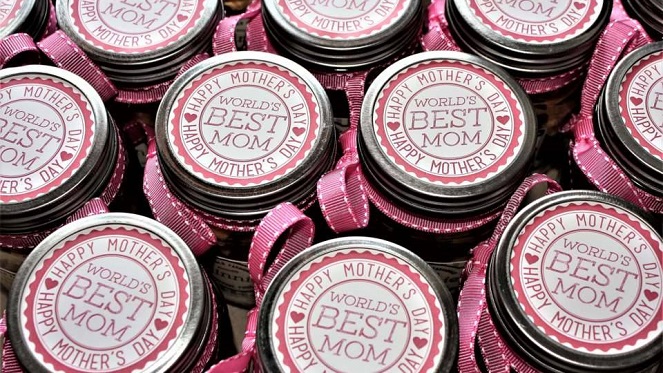 It’s not often that we declare something to be Joburg’s finest – but today we’re doing just that! Here’s why the Quinnies fudge brand is worth investigating… I have seen many people rave about Quinnies on Facebook, but had not sampled anything from their delectable-looking range. Until Easter. When I was given the most beautiful […] 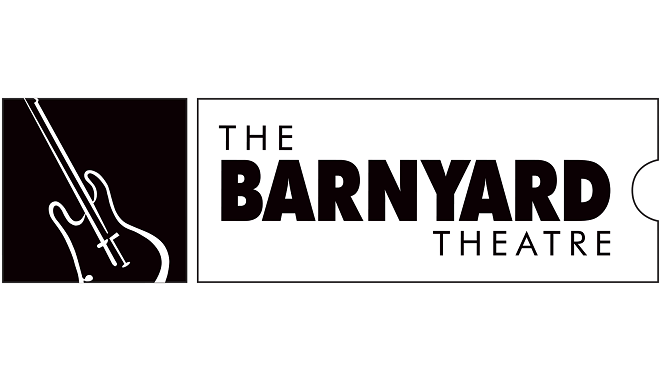 Don't Miss These Easter Specials When you think Barnyard Theatre, what comes to mind? We think fun, energetic, unique and exciting family entertainment for all ages! With this in mind, you'll certainly want to catch the Gauteng Barnyard’s Easter Specials from 30 March to 29 April 2018. It's amazing entertainment that won't bust your budget!: Pay […] 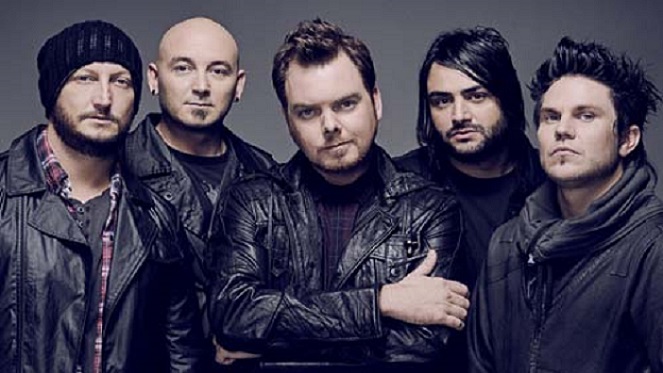 What Is It?  Rock royalty, Prime Circle will be touring around South Africa to promote their latest album , If You Don`t You Never Will  which was released in September 2017. The tour will feature performances from their latest album, feature artist such as Ross Learmonth (vocals and guitar), Marco Gomes (bass), Dale Schnettler (drums), Neil […] 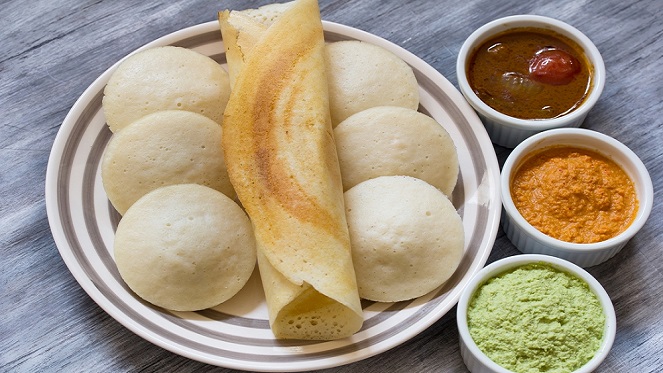 As South Africans, we're spoiled for choice when it comes to the variety of food we can chow down. From the old pizza place around the corner to Moroccan food in Maboneng, we have our mouths full of the good stuff. Now before you shrug Saravanaa Bhavan off as just "another Indian restaurant" in Joburg, I […] 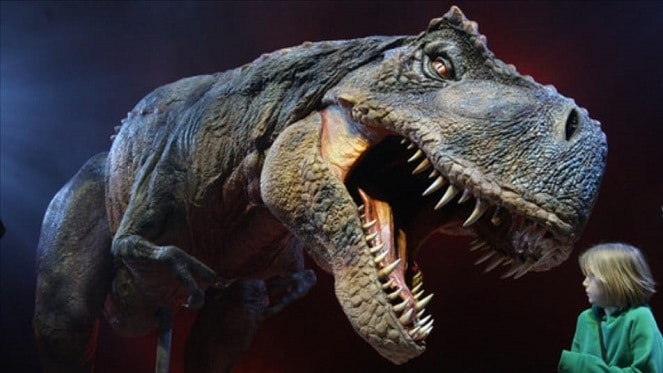 What Is It? Perfect for families and children of all ages, The Dino Expo promises to bring a selection of dinosaurs 'back to life' at the Sandton Dinosaur Exhibition. This exciting exhibition has traveled across the country, setup in more than 22 cities and towns, and has been witnessed by over six million people across the world. […] 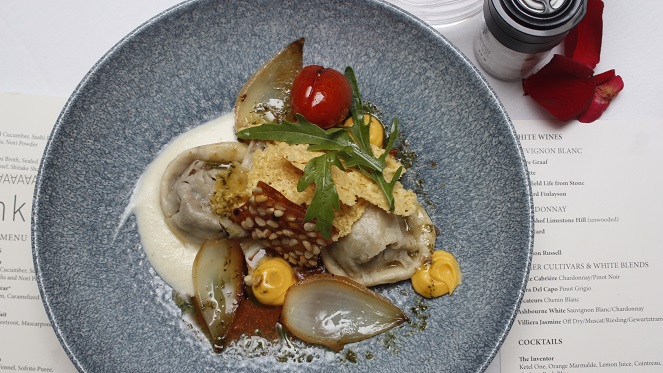 A couple of years ago, I lived in a little village called Usaka at the edge of Akwa Ibom in South East Nigeria. It was next to the largest palm oil plantation in West Africa. The nearest electricity was 4 hours away and most of the villagers worked at the plantation. One night we sat drinking […] 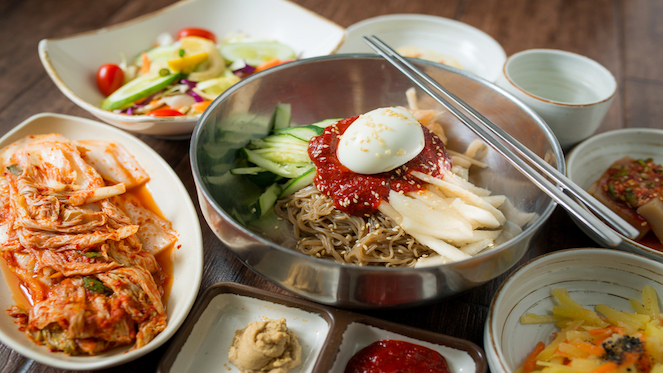 Arirang Located at The Leaping Frog Shopping Centre in Fourways, Arirang serves authentic Korean food. The restaurant is best for casual dining with family and/ or friends. There is also a full bar and takeaway service available. Alternatively, the restaurants accommodates small groups for seat-ins. Arirang is generally commended on great food that's sure to […] 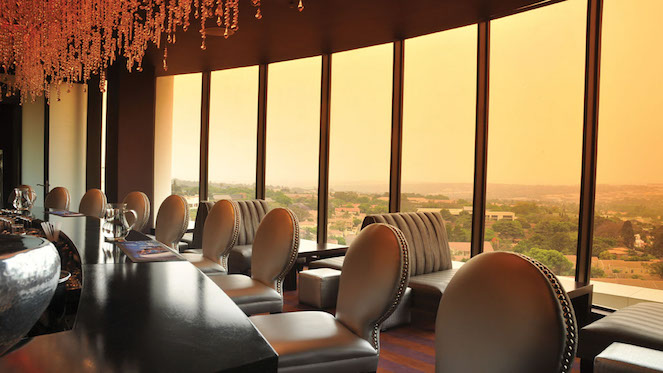 Skye Bar is located on the ninth floor at the Holiday Inn, situated in Rivonia, Sandton. The bar offers stunning panoramic views of Sandton and surrounding areas. Best views can be seen while enjoying a  sundowner cocktail or two. The décor of the bar definitely serves the eyes justice with its plush upholstered couches, classic chandeliers, […] 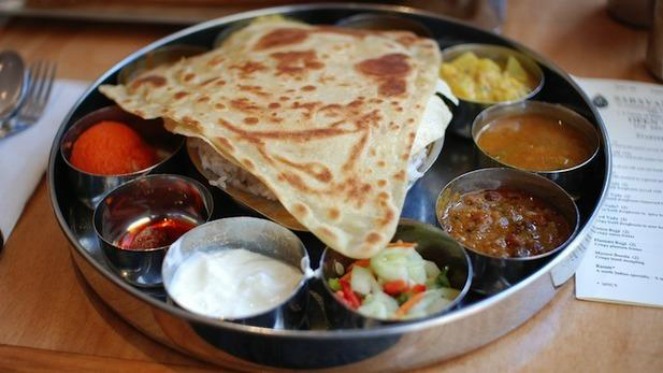 I’ll admit it: when it comes to trying new foods, I’m by no means adventurous (some may even call me boring). Recently, that all changed when I visited Saravanaa Bhavan, the authentic Indian restaurant in Rivonia. Let me first give you a little bit of background on the restaurant. Saravanaa Bhavan is a chain of […]