Motor heads, this one is just for you. Come and experience the thrill and exhilaration of the hottest motor sport and lifestyle event to happen this year. The Emerald Speed Fest will take place over three days, featuring 120 competitors. Join the adrenaline rush as high performance race cars, super cars and modern road-cars compete against the clock. Watch in awe as they race down a 1,6km winding asphalt strip. Only one will be crowned Master of the Mile.

All the action of the Emerald Speed Fest will be happening at Emerald Resort and Casino. Participants stand the chance to win up to R500 000 in prizes. However, even if you are only a spectator, this is definitely one motoring event you won't want to miss. So, circle the date on your calendars and gear up for an awesome three day motoring festival just outside the city.

Ticket prices will be announced closer to the event date. Check out their website for updates.

Follow Emerald Resort and Casino on social media for further details and to stay up to date with the latest events:

In April 2016 we were invited to a media conference held at the Kyalami Grand Prix Circuit. To prepare for the meeting we did a little bit of research on the place . It is shrouded in interesting facts. For instance, it opened in 1961 and was used to host the South African leg of the Formula One Grand Prix Championship until international sanctions were imposed because of apartheid. The original circuit was rated as one of the most dangerous tracks in pro racing and claimed the death of Welsh F1 driver, Tom Pryce. Bends and turns such as the infamous Leeukop Bend and the Kink were removed. Skip a couple decades and we're standing on the revamped, redesigned and ultra-modern Kyalami Grandprix Circuit. In 2012, the plot went up for auction. Most of those who attended the bidding wanted to bust down the pit building, rip up the tarmac and turn 77 acres of racing history into middle market apartment blocks. This was curbed by Toby Venter of Porsche South Africa who won the auction with a bid of R205 million. To Toby the 77 acre property is more than just a piece of land with curves and bends of asphalt on it. For decades Toby has spent time with his family at the iconic race track. He sees it as part of South African automotive history that must be restored and preserved for future generations. That is why events such as the SA Festival Of Motoring are now possible — because there is a world class venue available. 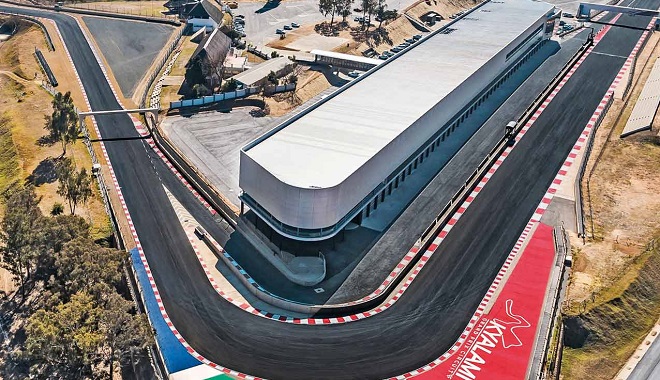 With Porsche South Africa's acquisition of the property, the subsequent revamp of key buildings and a new game plan, Kyalami Grand Prix Circuit has evolved above and beyond the regular race and track days. Events such as Comic Con Africa, the DSTV Delicious Festival and the Baby Show have made Kyalami Grand Prix Circuit their host venue of choice.

For the annual calendar check out Kyalami Grand Prix.

Have you been to The refurbed Kyalami Grand Prix Circuit? Let us know in the comments section below. Sharing is caring, so show this article to a buddy or three on social media.