The Great Moscow Circus is returning to Johannesburg and will be ending their South African tour at Carnival City during the Easter School Holidays and for 10 days only, guests can secure their spots at an unbelievable 50% off all tickets for weekday shows. This is one show you cannot miss… book today!

The world-famous Great Moscow Circus is returning to South Africa this year with an all-new, sensational, two-hour world premiere programme that is sure to thrill audiences. Featuring myriad circus superstars from Russia and across the globe, this is the most action-packed show to head to Johannesburg this year. This is an unforgettable treat for the whole family, so don't miss out on their Carnival City run starting from 31 March 2017.

With the funniest clowns, most-daring acrobats, death-defying daredevils, aerial artists, balancers, jugglers and much more all under the mighty Great Moscow Circus Big Top tent, this performance is sure to blow you away and leave you on the edge of your seat.

Get your tickets now for this affordable, once-in-a-generation family show, capturing all the thrills and fun of a traditional circus with the skill and daring acts of today’s circus heroes.

From Friday, 31 March 2017. Visit Computicket to get a schedule of show times.

Tickets cost between R195 and R595  and are available at Computicket. There are also huge discounts on tickets for kids during the Easter school holidays.

For more information about the Great Moscow Circus, visit their website at www.greatmoscowcircus.co.za, or check them out on Facebook. 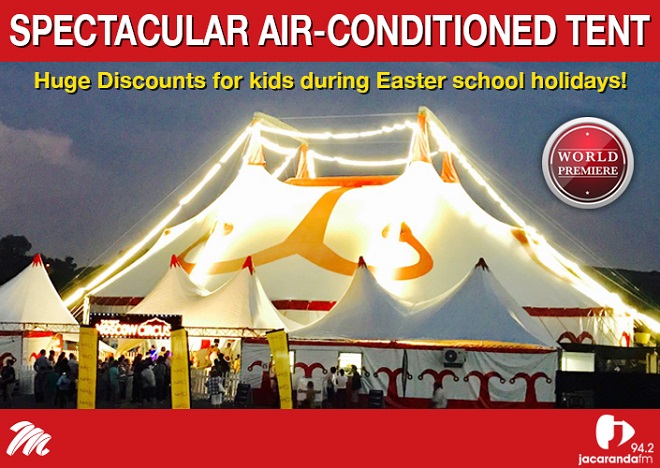 Michael Edgley’s production of the All New Southern Sun Great Moscow Circus is heading to South Africa in January 2006 with the World Premiere of its new show.

The breathtaking All New Southern Sun Great Moscow Circus will open with a world premiere show to the public on Saturday 14th January.

The circus will tour Johannesburg, Nelspruit, Bloemfontein, Durban, East London, Port Elizabeth and Cape Town over the next 20 weeks, before heading for Australia, Taiwan and other international centres. See Computicket for details.

The world’s most-famous circus will introduce 75 brilliant circus stars in a two- hour plus spectacular that features circus skills and acts that have never been seen in South Africa before.

By the time the Southern Sun Great Moscow Circus premieres under the mighty red and yellow “Big Top” over twelve months will have passed since its last visit, when it took South Africa by storm.

The All New programme features acts from Moscow and the other circus capitals of the world. It visits South Africa as part of an international tour, and will be the last time the circus visits South Africa for a number of years due to huge demand from other countries.

The tour is being sponsored by the Southern Sun group of prestige hotels. SABC 2 will again be the television partner.

The magnificent Great Moscow Circus Big Top has been updated with a new seating system, new air-conditioning and over R3 million ($US500,000) of new lights and sound.

Neil Fraser, Director: Marketing and Sales, Southern Sun Hotels said: “We are proud to be associated with the Great Moscow Circus for its 2006 tour of South Africa. Our sponsorship follows our successful involvement in the 2004/5 tour as official accommodation supplier.

"Southern Sun Hotels are known as the home of the stars, and we believe that our association with the Great Moscow Circus places us in the forefront of world-class entertainment. Through this partnership all South Africans will have another opportunity to experience grand-scale entertainment on their own doorstep,” added Fraser.

Producer Michael Edgley, who is bringing the show to South Africa, says: “When we brought the first-ever Great Moscow Circus to South Africa in December 2004, we promised a show, the likes of which had never been seen in this country.

”We asked you to forget everything you had ever heard about circus and to prepare yourselves for an unbelievable new experience. We are humbled that 400 000 South Africans flocked to the show. It caused a sensation and families just loved it.

”Now the Russians are sending us an entirely new programme. Nothing is repeated. Everything is new. The show is unimaginably spectacular. This is the finest circus ever staged. Even the Big Top which was especially built for South Africa has been completely re-vamped. You cannot miss this show.

Great news is that we have managed to hold ticket prices at the same level as they were for the 2004/5 tour,” Edgley said.