As South Africans, we're spoiled for choice when it comes to the variety of food we can chow down. From the old pizza place around the corner to Moroccan food in Maboneng, we have our mouths full of the good stuff. Now before you shrug Saravanaa Bhavan off as just "another Indian restaurant" in Joburg, I would like to stop you with a "hey, buddy, his is South Indian food, ya goof".

With that said, it's good to note that there is as big a difference between North and South Indian cuisine as there's between a chicken and a duck. The ingredients in both regions are similar but the difference comes in the cooking methods and mixtures... and the fact that the south is predominantly vegetarian. Yup. Vegetarian food enjoys widespread popularity in the south of India – and that is where one of the largest vegetarian chain restaurants was born. 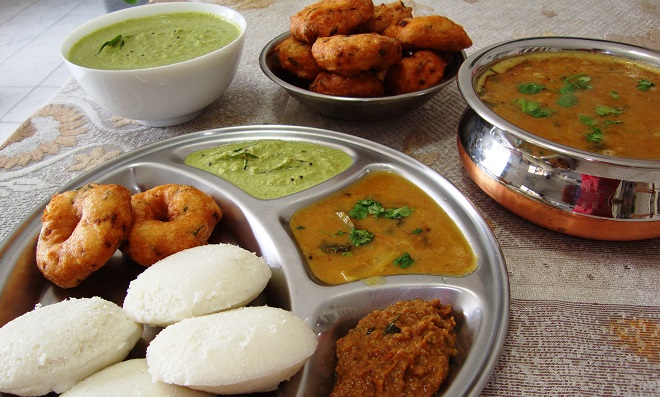 Hold my hand and let me walk you through the wonderful world of good vegetarian food... and yes, there is such a thing. The menu at Saravanaa Bhavan in Rivonia is packed with delicious dishes. Patrons can expect mini-idlis (fermented rice dumplings) immersed in delicious lentil gravy garnished with ghee for starters, a wide selection of dosas (massive Indian pancakes) with delicious fillings for mains, and for dessert they have the most velvety ice creams, Falooda (made from mixing rose syrup, vermicelli, sweet basil seeds, and pieces of jelly with milk) and fruit salads in town.

The menu is massive with an extensive list of different veggie curries, a Chinese wok (yup) and lovely treats made in their clay oven. In fact, this restaurant is so South Indian that their entire kitchen comes from that region. Another interestingly South Indian thing is that all the plates, cups, spoons, forks, knives, etc. are similar to those you can find when eating at a restaurant in India. They also recently included a juice bar where you can enjoy 100% apple, pineapple and mixed juices... oh, and they have madras coffee. If you don't know what that is then you're in for a treat. You can also find them on UberEats – just remember to be in the 3km radius of the restaurant to order from them.

All in all, it's a hit and a half. If you like authentic Indian food or struggle to find a lekker vegetarian restaurant, then make sure to pay Saravanaa Bhavan a visit.

Here's a little video I shot of the chef at Saravanaa Bhavan making a dosa.

Have you been to Saravanaa Bhavan in Rivonia? Let us know what you think of it in the comments section below. Sharing is caring, so show those vegetarian friends of yours this cool review.

A couple of years ago, I lived in a little village called Usaka at the edge of Akwa Ibom in South East Nigeria. It was next to the largest palm oil plantation in West Africa. The nearest electricity was 4 hours away and most of the villagers worked at the plantation.

One night we sat drinking Gulder Lager in the ruins of a high school classroom. It was here that the villagers told me a simple folktale ...

Once, there was a brilliant hunter who provided ample food for the village. Everyone loved him. But one season, the elements were working against him and he couldn't bring any meat home. But he kept trying. While tracking antelope, he stumbled upon a lion crying under a tree. The hunter approached cautiously and saw that there was a big thorn stuck in the lion's paw. The hunter took pity upon the lion and carefully removed the thorn. A couple of days later, the hunter came across a herd of antelope but he, once again, couldn't bring down a single one. Suddenly, the lion appeared from the bushes with an enormous antelope in his jaws, which it lay at the feet of the hunter. The villagers feasted on the delicious meat and from that day, the spell was broken and the hunter could, yet again, provide ample food for the village.

With this story about food, feeding and renewed abundance, I'd like to introduce you to the newcomer on the African cuisine culinary scene. The much anticipated Asanka opened its doors in mid-Feb 2017. The two executive chefs have crafted a menu of interesting takes on dishes found all across the continent. The idea was to take recipes from north, east and west Africa and give them a fine-dining twist.

Well, let me mention a few of my personal Afro-fusion favorites. On the starter menu, the oxtail ravioli is by far the most interesting dish I've had in a while. The pasta is handmade and then stuffed with tenderly slow-cooked, shredded oxtail. Another winner is the aniseed poached pear which is drenched in Gorgonzola cream and caramelised yogurt.

For mains, the Moroccan spiced lamb loin is delicious. It is served with apricots, cauliflower mousse and soy marinated parsnips. My companion had the harissa brisket which is served with charred spring onion, potato chips and celeriac puree.

The coup de grâce was the dark chocolate desert.

The entire menu is well executed and offers something to satisfy virtually all preferences. And of course, no fine dining is complete without a varied wine list. Asanka has a bar with a massive patio which sports long couches and comfy chairs on which to enjoy a drink from their extensive bar, which serves some awesome cocktails.

Service was of the highest standard as I was welcomed with open arms. Each of the three waiters that I dealt with was brilliant.

So, what's the story about the lion and the hunter have to do with Asanka? Well, Asanka is the lion bringing the goodness of African food back to the people. No standing ovation for the lame analogy, I know ...

Have you been to Asanka yet? What do you think of this awesome twist on African food? Also, share this on social media and go have lunch there with friends.

If you are looking to be transported far away to a Arabic land then look no further, Po Na Na Souk Bar offers you a Moroccan themed bar, without even leaving Johannesburg.
Po Na Na is a North African term, which loosely means a blend or mix of many things, which is exactly what you get when it comes to the drinks here. Expect a fusion of different exotic flavours and ingredients such as mint, cinnamon and honey too mention a few.
This bar/lounge is decorated in comfortable couches with golden, red lighting and North African details such as carved Moroccan side tables and screens throughout.