Kyalami, the pride of Midrand is known for its Grand Prix Racecourse, horse stables, and even a massive Medieval castle. Who would have thought that Johannesburg's northern-most region would become even cooler? Well, now it has, thanks to plant-based fast food joint, Lekker Vegan. The Cape Town-based eatery opened its first Gauteng store at Kyalami On Main.

Dedicated since 2017 to making you lekker plant-based comfort foods with the best meat, cheese, and dairy alternatives, so you won’t feel like you are missing out! Lekker Vegan is the brainchild of animal rights activist and restaurateur James Knaap, who honed his skills as a chef in a vegan fast food joint in Amsterdam.
Truth is, most vegans, vegetarians, and flexitarians didn’t choose plant-based because they don’t like the taste of meat and dairy. For most, it is for health, environmental or ethical reasons. Making vegan food taste like foods you are used to or even better, makes transitioning into a more plant-based diet a whole lot more... lekker. 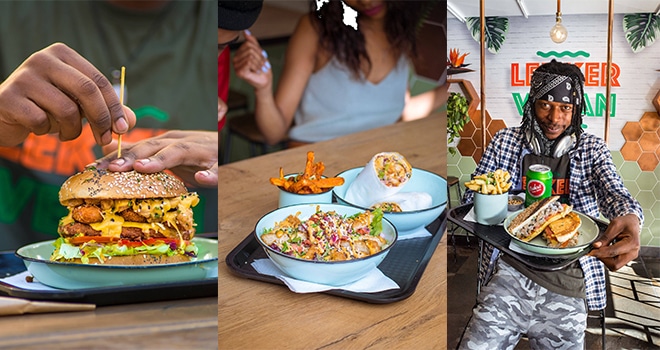 A plethora of veganised versions of fast-food favourites is available – including hamburgers, nachos, nuggets, chip rolls, Gatsby’s, and even ice cream. The burgers are beyond phenomenal, by far the best items on the menu, coming in close to the legendary Gatsby's. Surprisingly, the patties are super juicy, full of flavours and bursts with umami goodness. It tasted like a slightly under-seasoned, lighter version of a beef burger, to be honest, which is still good in our books. Another winner on the menu would be the sweet potato fries, garlic "mayonnaise" and "chicken nuggets".  Our suggestion would be that you take your time when going through the menu, it's a beast and a half.