If you were looking for a truly interesting - and possibly strange place to visit - look no further than the Kwa-Khaya Lendaba or Credo Mutwa Cultural Village in Central Western Jabavu, Soweto. Created by renowned author, artist and traditional healer, Credo Mutwa, the cultural village offers an outdoor museum celebrating African art, culture, and folklore.

In order to understand the meaning of the site, you have to know about its maker. Vusamazulu Credo Mutwa is known as the “awakener of the Zulus” and was appointed to Mutwa during his initiation as a sangoma. Mutwa means ‘little bush man’, and Credo means ‘I believe’. He has become a figure of international prominence for his beliefs in extraterrestrials, claiming that he has been a victim of an alien abduction.

According to Newdawnmagazine.com, “Mutwa claims that much of the knowledge he now possesses – of art, science, medicine, engineering and so on – can be attributed to the fact that when he was a child, he was taught by “strange companions.” These “little people,” he says, some of whom were blue in colour, used to make their presence known to other children as well. In fact, “all African children used to see such things.” Thanks to the help of these beings, he says, he was often more knowledgeable than some of his teachers at school.”He is also said to have had psychic powers, which is how he came to predict the AIDS epidemic in 1976, three years before it was officially discovered by US scientists.

The cultural village itself seems a prolific manifestation of Mutwa’s beliefs and prophecies and the site is filled with sculptures and symbols relating to Mutwa’s teachings, in the endeavour of reawakening Africa's traditional beliefs and rituals. It is  a unique and almost eerie place to visit. 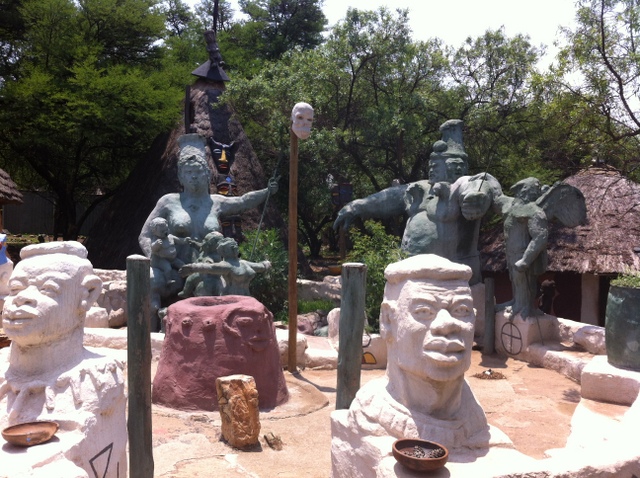 The sign at the entrance reads: “Kwa-Khaya Lendaba, the home of the story. Enter in peace." This place is no mere museum or tourist attraction, it is a holy place where African cultures, religions, and indigenous sciences are recorded and preserved in picture form. All visitors are expected to respect the grounds, as they would any other place of religion. All liars, fools and skeptics must please keep out. A curse lasting seven years shall befall on all who destroy any part of this place.”

So enter at your own peril. We can promise you, it will be an experience to remember.

Have you ever been to Kwa-Khaya Lendaba Cultural Village? Tell us about it in the comments section below!