John Kani and Barney Simon's The Lion and The Lamb returned to the Market Theatre in November 2019 to much anticipation. Last produced by the Market Theatre in 2009, this contemporary retelling of the story of Christ is the perfect Christmas-time theatre event. I booked tickets to the show, eager to see Kani in action on stage. Unsure of what to expect, I went in with an open mind and unbiased approach. Needless to say, what I saw was a delightful surprise. 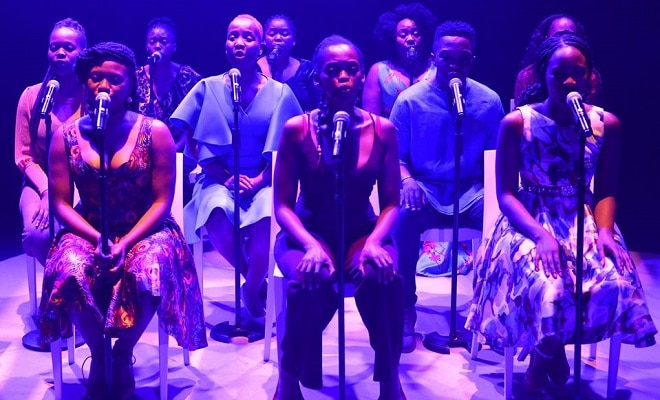 The Lion and The Lamb is first and foremost a musical play. Opening with a solo performance by the soulful Itumeleng Tshabane, the play begins its first act - The Birth of Christ. Against an eclipsing projected backdrop, Kani enters, taking his place as the main narrator and immediately giving the audience the sense that his performance will be doused with energetic storytelling. His years of stage experience shine through, guiding his fellow narrators through their scenes. Keeping the audience at the edge of their seats, he brings a delicate humour to a story known world over. Interspersed with unique African-isms, Kani's narration offers a refreshing take on the Christ myth.

A choir of talented gospel songstresses join Kani on stage, including Nokukhanya Dlamini, who was part of the original production. Reprising her role as the lead singer, she elevates the story of Christ's birth, life and death to new heights. Each ballad of the story is equally narrated by dialogue and song and every choir member given their moment to shine. Not one failed to deliver, taking the audience to church with familiar traditional gospel songs and songs from the International Gospel Songbook. From the first act to the last - Christ's ascension to heaven - there are moments of celebration. Ultimately, this is musical theatre at its finest. 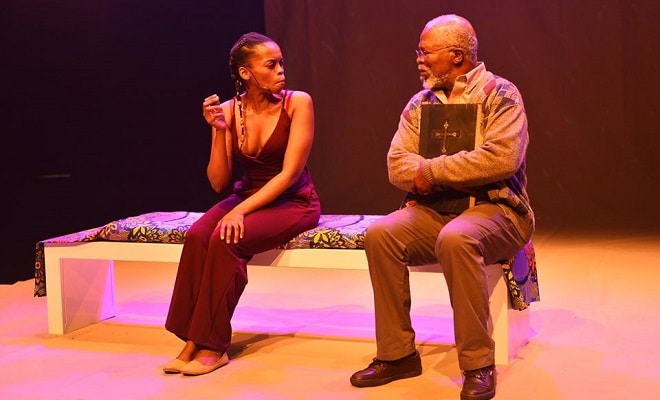 A Word From The Director

The Market Theatre's James Ngcobo directs Kani for the first time in his career in The Lion and The Lamb.

"It’s never easy to re-imagine any classic, but I am blessed to work with theatre giants like John Kani and Nokukhanya Dlamini, who were part of the original cast. It makes my task much easier to undertake," he said of the production.

"My vision for the 2019 re-staging of 'The Lion and the Lamb' is to add young talented actors and musicians to blow up the musicality and acting in the production. I am blessed to have found some of the finest actors who will be taking the baton from John Kani in roles as supporting storytellers. I am looking at breathing new life into a classic play, handled with the delicateness that it deserves and also to give emerging voices an opportunity to perform alongside a great actor like John Kani", said James Ngcobo.

Promising audiences "a spiritually charged evening of praise and worship", Ngcobo and his cast delivered. All in all, The Lion and The Lamb is an enigmatic theatre experience for all. You need not be familiar with the story of Christ to enjoy or understand the game at hand. Delivering their lines with Shakespearean precision, Kani and his fellow narrators entwine the very best of African storytelling practice with eloquent language and comedic interplay. This is a definite must-see for the Christmas season.

The Lion and The Lamb is on stage at the Market Theatre until Sunday, 22 December 2019. Tickets are available online via Webtickets.

The Lion and the Lamb tells the story of Jesus the child, Jesus the man and Jesus the Son of God. However, this is the Christ myth told with startling difference. Featuring popular South African gospel music as the backtrack for Kani's electrifying performance. This allegorical stage masterpiece resonates with audiences of all denominations, cultures and religions. Above all it is about the relationship we as a nation have with the figure of Christ.

In October 1989, Market Theatre co-founder, Barney Simon, and Associate Artistic Director, John Kani, founded The Market Laboratory. Responding to the lack of higher education in the performing arts for black students, the Market Lab became a haven of knowledge and expertise.

30-years on, the Market Lab maintains its reputation for being one of the premiere training centres in Southern Africa. Boasting an impressive alumnus, including Olive Schreiner Award winner, Phillip Dikotla. Three Standard Bank Young Artist of the Year winners have also come out of the Market Lab's training programme. Namely, Monageng Motshabi (2016), Prince Lamla (2013) and Mncedisi Shabangu (2014). The Market Lab provides underprivileged youth with the opportunity to master their art and go on to become industry professionals. 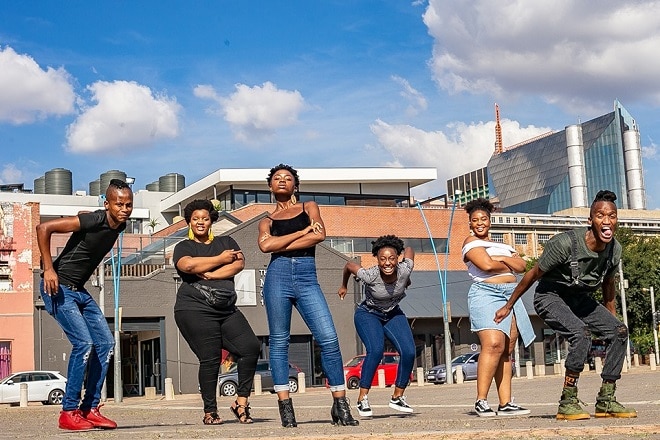 The legacy of the Market Lab is felt far within the community. The centre is known for engaging with issues of human rights, poverty and gender-based violence in their ensemble pieces. They host a number of community-driven initiatives, many of which have led to the annual Community Theatre Festival and Zwakala Festival.

In honour of the Market Lab's 30th birthday, the Market Theatre Foundation will be hosting a two-week festival. Showcasing alumni work, photo exhibitions, improv play-offs and some of the best theatre of 2019. The Lab also invites students, academics and theatre enthusiasts to a series of workshops and debates around storytelling, community theatre and collaborative creation.

The two-week festival will see a number of exciting theatre productions take to the Market Lab stage. Kicking off with the Kwasha Theatre Company's adaptation of Eugene Ionesco's Rhinoceros. Directed by Market Lab alumni, Billy Langa and Mahlatsi Mokgonyana, Rhinoceros offers satirical comment on the rise of totalitarianism and conformism. This is Theatre of the Absurd at its finest, so get your tickets as soon as possible. 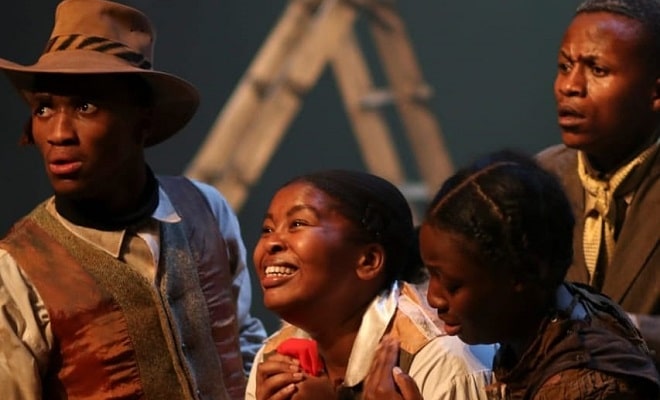 Vuka Machel is a revolutionary comedy. Imagining that Mozambican president Samora Machel, has risen from the grave to find his wife Graça married to our very own Nelson Mandela. Machel and Mandela then square off in a series of boxing matches at the World Trade Centre. Seen through the eyes of two chicken thieves, Vuka Machel is reminiscent of Barney Simon, Mbongeni Ngema and Percy Mtwa's Woza Albert!

Other great shows on the bill include Born Naked, Skierlik, Darkie and Text Me When You Arrive. Click here to see the full lineup.

The festival will take place until Saturday, 23 November 2019.

There are a number of free and pay as much as you can events. Tickets for theatre shows cost R100 per person and may be booked online at Webtickets.