There is an incredibly distinct aesthetic about Steven Cohen's work. Using repetitive iconography such as butterfly wings, pointe shoes, chandeliers and false eyelashes, Cohen subverts cultural norms. Born in 1962, Steven Cohen is one of South Africa's foremost intervention artists. Inserting himself into the public realm, his performances are both uncanny and visually stunning.

Steven Cohen presents his fourth exhibition with the Stevenson Gallery this November. His previous body of work showcased in 2017, titled put your heart under your feet...and walk!, was a resounding success. Dealing with the aftermath of the death of his longtime partner and collaborator, Elu Kiesler, this marked Cohen's first solo exhibition at the Johannesburg gallery. 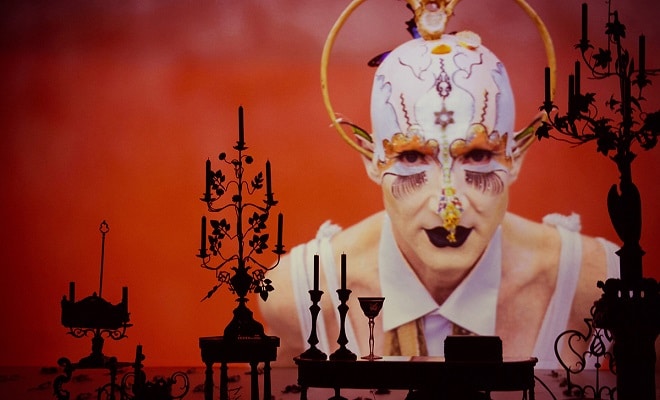 "put your heart under your feet...and walk!"

Cohen is now back at the Stevenson, bringing audiences an intimate series of self-portraits titled There's Glitter In My Soup! Taking up residence at the gallery for three months, this exhibition is a must-see. Undoubtedly, one of Cohen's most introspective showcases, There's Glitter In My Soup reflects on an outstanding life and career by one of our country's most prolific artists. If you have never seen a Cohen exhibition, then let this be your introduction to his mad, quirky self-made world.

The Story Behind The Glitter

Those familiar with Cohen's work will know the importance of makeup and costume in his performances. His new series of self-portraits are crafted using the makeup right off of his face. An extension of his 30 year performance practice, this exhibition stands as a testament to memory. Incorporating his instantly recognisable iconography, including those beautiful butterfly wings, into these portraits. Cohen presents the image of his own face as something both outside of himself and inhabited.

The story behind There's Glitter In My Soup begins over a decade ago. Cohen explains:

"The birth of this idea to remove my makeup with adhesive tape came at an elegant museum supper one night 10 years ago, with an accusing glare followed by a rebuke from across the dinner table: ‘There’s glitter in my soup!’

I had just finished performing. I was embarrassed. In my bag, I had a roll of duct tape, and I used it there and then to remove the glittered makeup from my face. It was efficient. There is a real relief in peeling off the eyelashes – eyelashes are pointe shoes for the eyes. After that, the breakdown of the makeup using pressure-sensitive adhesive tape became part of my post-performance ritual." 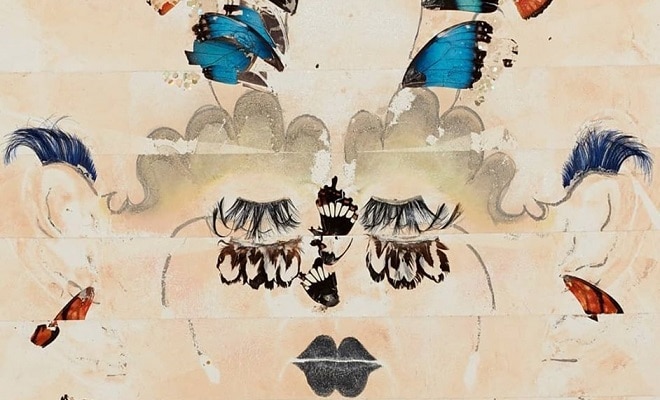 Cohen thus imagines this new body of work as a palimpsest of sorts - a reconstruction of something that was once part of his skin. By literally ripping off his own cosmetic character, Cohen presents his audiences with an alternate version of himself. Looking out from beneath the mask, he reveals his most fragile state. With such a drastic breakaway from his usual outward attack on society, this may just be Cohen's most vulnerable body of work yet.

Entrance to the gallery is free.

Visit the Stevenson Gallery website for more information about Steven Cohen and the exhibition. You can also follow the gallery on social media for further event updates: