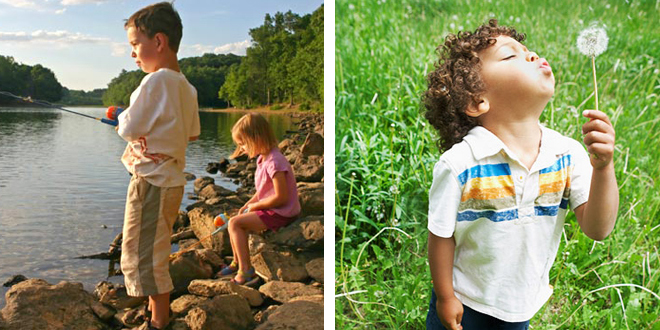 Though the grown-up instinct as an adult or caregiver would be to get a child a colouring book and some crayons, try out finger painting instead. The messy and unlimitedness of it all is great fun - not only for the child but for yourself too, should you get involved.

Finger painting allows kids' imaginations to run wild and free, expressing themselves and satisfying their curiosity without any bounds. Finger painting has also been proven to be therapeutic for adults, making the activity all that more beneficial for all ages!

Everybody loves music and dancing! And you'll find the younger children are less shy to express that love with some vibrant music. Freeze! is a fun way not only to get the little ones' blood pumping, releasing happy hormones and expressing themselves physically, but it comes with a little challenge.

When the music stops, the children should freeze in whatever position they are in, no mater how awkward or strange. To add more of a challenge, you can make a rule that the freeze position should be in a specific shape, animal, letter or even yoga position. The child to hold the freeze position longest wins!

There is so much pleasure for children, and anyone really, to figure out clues and find hidden objects. This is what makes treasure hunts so much fun, especially if there is a prize at the end or an accumulation of prizes with every clue figured out and hidden object found.

Clues can be written in riddles and creative language to make the hunt all that more fun and challenging. Accumulation of prizes with every clue figured out could be like pieces of Mr Potato Head hidden in different places with the body/potato itself being the grand prize/last clue to uncover. But you can really play around with how you structure your treasure hunt to get the most out of it!

Most of us remember Simon Says from when we were younglings at pre-school and early primary school. Having been passed down from many generations before, this game has become a traditional favourite for many.

Usually the adult or caretaker present is Simon while the kids gather in a circle or in parallel lines in front of Simon. Commands or actions illustrated and given starting with the phrase 'Simon says' should be copied by the players. For example, "Simon says: lift your right leg".  Commands given without the phrase 'Simon says' should not be done. Players that do them anyway are eliminated from the game. The remaining player and winner has the chance to be the next Simon!

Players sit in a circle with a piece of paper and pen. An extra paper with letters of the alphabet scattered is placed in the centre. Each player has a chance to cover their eyes and circle a letter. Then, 60 seconds should be given for all players to name different objects that start with that letter categorised in different sections such as names, cars, colours, cities, and so on - categories you choose to put down will determine the challenge level of the game and all the while test general knowledge skills based on vocabulary. Each existing word or object written equates to 10 points. A dictionary can come in handy here for the scorekeeper. The player with most points wins!

What are some of the fun activities you do with your kids? Let us know!