Going to midday music concerts may seem like an activity only meant for music scholars or theatre critics. But, the Average Joe could enjoy the soothing sounds of a jazz band or forty piece orchestra just as much. In fact, we think that popping into a noon time music show is a great way to de-stress and reboot before tackling the rest of the work day.

Luckily, there are three notable venues in the city which offer Joburg natives the chance to chill out to some tunes in the middle of the day:

The Auto & General Theatre on the Square

This 200-seat theatre venue is tucked away just opposite the extravagant Nelson Mandela Square restaurant boulevard in Sandton. They were the first theatre of their kind to introduce a lunchtime classical music concert. Conceptualized over a decade ago, this feature is now a regular Friday event. Shows usually take place at around 1:00 pm on Fridays, with tickets available at the Box Office until thirty minutes prior to the start of the show. Tickets prices are often capped at *R50, and include entrance to the show, a play bill and tea and biscuits after the show.

The theatre has already booked a stellar range of classical performers for their lunchtime concerts until 24 May 2019. Audiences can expect everything from guitar and violin duets to an ensemble of Argentinean Tango Music. On Friday, 26 April 2019 the theatre will present a Pre-Freedom Day musical tribute concert performed by Pops Mohammed. The concert is set to explore the rich tradition of African indigenous music and instruments in honour of the 25th anniversary of our country's democracy.

The Wits School of Arts music division present a weekly midday concert in the Great Hall on the universities Main Campus in Braamfontein. These musical showcases often feature some of the divisions most promising students, as well as acclaimed classical and jazz musicians. The best thing about this concert however, is that admission is free! (The only downside is that you may have to battle a couple of harried students to find a decent parking on campus.)

The lunchtime concerts at Wits occasionally take place on Wednesdays from 1:15 - 1:50 pm. Check the university website for further details on upcoming shows. If you have the time, also check out The Olives and Plates Alumni House on West Campus after the show. Their carrot cake is to die for!

It is almost impossible to miss the imposing figure of the Joburg Theatre over the city. This massive theatre precinct hosts every kind of performance event imaginable. From international musicals to children's theatre and dance spectaculars - they have it all. Speaking of dance, the theatre often stages daytime showings of classical ballets performed by the Joburg Ballet company. While this is not a music concert per say, the Joburg Ballet does frequently perform with the Johannesburg Philharmonic Orchestra. So, if you find yourself drifting off during a court scene, gaze down into the orchestra pit for a change of scenery. (You can often spot the percussionists getting up to mischief when they think no one is looking.) 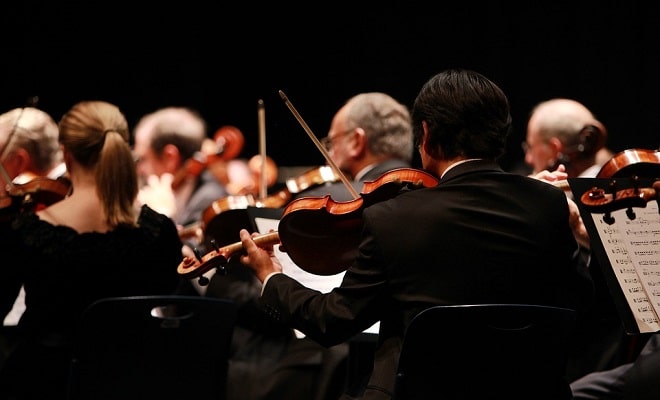 Do you know of any other venues in the city that host midday music concerts? Let us know about them in the comments below!

The centre of Johannesburg brims with live performance spaces, including the iconic Joburg Theatre Complex. Our other favourite independent inner city venues include The Market Theatre Laboratory, The Space.com and the UJ Arts Centre.

These spaces offer everything from classical opera and ballet, to the best upcoming student productions from the most well-renowned drama schools in the city. We recommend you become a frequent visitor to any of these great venues. They produce multiple shows year-round, with tickets often available at discounted prices.

On the other side of town, The Auto & General Theatre on the Square sits happily hidden away beneath the Nelson Mandela Square shopping mall and restaurant complex. The venue is decorated in deep cabaret reds, but audiences can expect a range of diverse productions on show. These include classical music performances, comedy shows and the best in post-post-modern South African theatre.

Last, but not least, the South-West corner of Joburg offers theatre lovers two grand performance complexes to catch the latest big-budget original musicals, dance shows and school festivals. The Roodepoort Theatre and Soweto Theatre are subsidiaries of the Joburg Theatre, which means they are not wholly independent. However, smaller productions are regularly given the limelight at these complexes. Poetry showcases are billed alongside grand symphony concerts, for example.

Cupcakes and Commiserations, a psychological thriller set to enthrall audiences at the Auto & General Theatre on the Square. Set inside a kitchen in Johannesburg, the play lays claim that there is no discernible recipe to love.

The play combines the stories of five woman. They are brought together as they attempt to solve the mysterious disappearance of Frank Thompson. Frank, who is married to Nola is also having an affair with two other women. The play thus explores the themes of infidelity, betrayal, seduction, addiction and abuse.

Watch as these five woman interrogated about Frank’s disappearance, commiserate over the elusive recipe of love.

Ticket prices will be announced closer to the show date. Check out the theatre's website and Facebook page for updates.

Josias Dos Moleele's new show, Call us Crazy is coming to the Auto & General Theatre on the Square. Starring Moleele alongside Maritjie Bothma and Sello Sebotsane, the show is fast-paced, multi conventional, full of pun and intended meaning. As such, Call us Crazy essentially asks South Africans to laugh at ourselves. The play tells the story of a disillusioned road construction worker, Oompie, and is sure to have you in stitches.

Get your tickets now!

Tickets cost between R110 - R150 per person. Get yours at Computicket.