Rugby legend, Victor Matfield, called on South African sports fans to support the Springboks in their quest to bring the Rugby World Cup home once again, revealing the “biggest Bok fan in the world” – a 4m-high rock sculpture dressed in a giant Springbok jersey by property company, Atterbury.

The massive Son of the Soil, commissioned from acclaimed artist, Angus Taylor by Atterbury and placed outside its head office at The Club in Hazelwood Pretoria earlier this year, has been transformed into “Springbok of the Soil” for the duration of the World Cup tournament.

The huge jersey is as close as possible to an exact copy of the official gear the Boks will be sporting during the World Cup, says Atterbury CEO, Armond Boshoff.

“We are huge Springbok fans at Atterbury – our blood runs green for the next month,” says Boshoff. “The fond memories of the way the Boks’ 2007 World Cup win united South Africa, inspired us to make a larger than life statement of support for this bid. There may be a lot of bad news around us, but we believe that there is much to be positive about in South Africa, and business has a responsibility to identify and celebrate good news and show confidence in our country.”

Dressing the sculpture in a Bok jersey and shorts was quite a challenge, according to Boshoff. The jersey had to measure a metre and a half in length, and fit a manly chest with a circumference of two and a half metres! “It was made with an open side seam with a Velcro closure to be able to dress the immovable figure,” he explains.

Taylor created Son of the Soil out of layers of some of the oldest rock on the planet, including grey Belfast Gabbro, that dates back 2-billion years, and 3.5 billion-year old green Verdite from the Barberton area.

The “Springbok of the Soil” will wear his green and gold regalia until the 2019 Rugby World Cup final on 02 November 2019. And to add to the excitement, Atterbury will host a RWC 2019 fan park at The Club and the adjacent Old East Precinct for the weekend of the quarter final, 19-20 October 2019.

For more information about the "Springbok of Soil", contact [email protected].

Work has started on the first new residential building in Jewel City on Main Street and, in addition, the first residential conversion of an existing building on site is now underway. The Jewel City redevelopment initiative is a substantial investment in Joburg by Divercity, a new investment fund that is renewing and re-energising South Africa’s urban centres with unique inner-city precinct development.

Phase One Of Divercity's Project

The estimated time of occupation in the residential section is expected to be in November 2019 as the first floors of the development are completed. Upper floors will become available first, moving down the buildings until all floors are finished, with Phase 1 completion in April 2020. 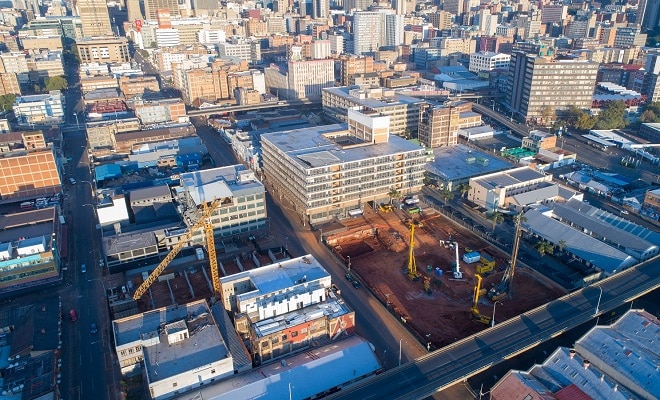 By remodelling Jewel City’s existing buildings and constructing new buildings of over 40 000sqm, Divercity is converting a formerly closed-off area of the city into a thriving, modern inner-city neighbourhood. Jewel City will reopen to the public in 2020 as a vibrant mixed-use precinct, including 1 200 new residential apartments in its first phase and up to 1 000 in its second phase.

The master programme for Jewel City has been orchestrated so the development of all six buildings of the first phase will be completed at the same time. “There will be a crescendo of activity as those buildings that require less time for completion are progressively added to the active construction programme,” explains Derrick Pautz, Atterbury Development Manager. 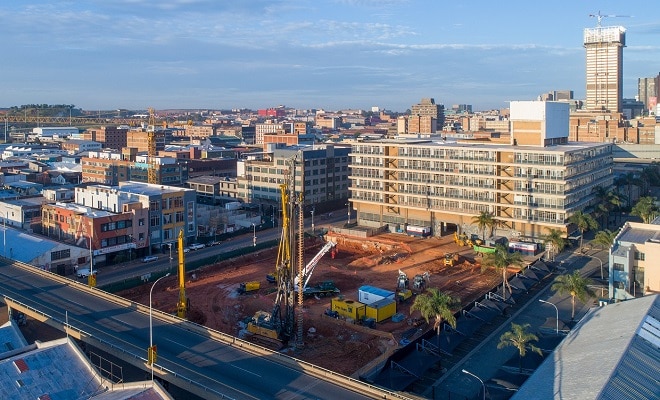 The amenity-rich mixed-use precinct also includes commercial space and parking. There is already good progress on leasing the development’s first 14 000sqm of commercial space, which includes a primary and high school, as well as medical facilities.

The world-class "live, work, play" Jewel City will connect with two other Divercity projects, being the new Towers Main redevelopment in the ABSA precinct and its vibey Maboneng residential addresses. This link will be facilitated with a people-friendly walkway along Fox Street.

“We’re excited to break down the walls of Jewel City and open up great living opportunities and enhanced quality of life for people in the city,” says Pautz.

The development is a massive boost for the economy of Joburg. It will create an estimated 1 279 temporary jobs and 25 permanent jobs, and add to both the municipal and national tax base. Jewel City is expected to have a total development value of more than R1.2bn once complete.