The fantasy world of fairy tales and romance comes alive at Emperors Palace this May, as the classic story of Sleeping Beauty will be turned and reenacted on stage as the new Afrikaans pantomime, Doringrosie: Die Slapende Skone.

What Is It About?

On the eve of her 18th birthday, the beautiful Princess Aurora pricks her finger on a spindle of a spinning wheel and falls into an enchanted deep sleep. Is this the end, or will the kiss of the handsome Prince awaken her?

The talented and beautiful, Charlize Berg, shines in the title role opposite the talented actor, presenter and singer, Marno van der Merwe, who will be playing the role as the heroic Prince Aalwyn. The passionate, Bianca Le Grange, is of course, the perfect Belladonna (Maleficent), while the sharp humour of the two Good Fairies (Hannes Brummer and Tiaan Rautenbach) will put a smile on everyone's faces.

Fresh on the heels of the excellently received Sneeuwitjie (Snow White) and Aspoestertjie (Cinderella), this production is sure to be another hit! Doringrosie will be an exciting adventure with something for everyone, complete with humour for the parents, intertwined with the most beautiful fairy tale elements for children. Book your tickets now!

This new pantomime will be taking centre stage from 05 May - 04 June 2017. Show times are as follows:

Tickets cost R170 per person and are available at Computicket or at any Checkers.

For more information about this show, visit the Emperors Palace website at www.emperorspalace.com. You can also call them on (011) 928 1000.

Spending his young adult life in Joburg during the early 80s, Deon Maas documented a lot of the trials and tribulations of that time. He was a young punk, armed with a 35 mm Pentax K-1000 camera, a notepad, and a heart full of fire. He was a regular at the Chelsea Hotel, invested time discovering new music at the Hillbrow Records, and befriended poets and artists in Yeoville along the way.

Much has passed since the avant-garde party scene of Hillbrow faded. It was a time that sculpted Deon into the social anarchist he is today. People familiar with Deon know that he would much rather lob a molatov cocktail at the face of injustice than talk about everybody's feelings. What makes this guy so valuable in today's society is that he has kept his finger on the pulse of popular culture since his escape from the womb... and no matter how you look at it, owning 50 odd years of knowledge on this subject is more valuable than most university textbooks.

It's Deon's hands-on experience in this matter that forms the foundation of his book, Melk Die Heilige Koeie (Milking The Holy Cows). There are people who don't like Deon because he often spearheads topics and current situations that are too tendentious for public debate. But it should also be said that there are far more who like him because of this. He is known as the king of controversy in local media and what makes his tongue sharper is that he is able to back everything he says up with facts. 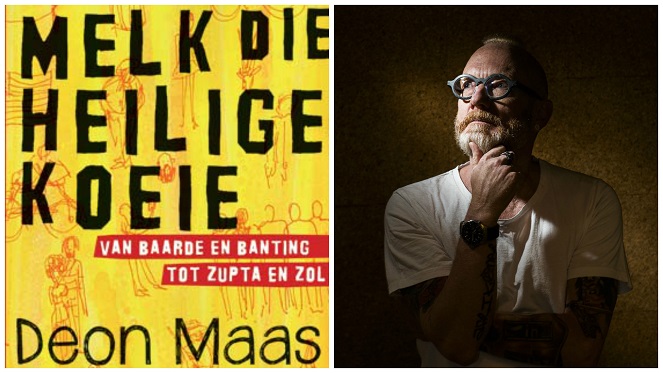 To add colour to our interview with Deon, the author suggested that we meet in Cyrildene for lunch. At the bottom of Derick Avenue there is a small restaurant where the owner doubles as its sole waiter. He greets Deon by name, sits us down and instructs the kitchen to prepare a plate of Peking duck. It is clear that Deon has been coming here for years. As we open our first round of Tsing Tao Deon's phone rings. It's his editor. She tells him that Melk Die Heilige Koeie has sold more copies than the new Harry Potter book in Cape Town. This is proof that controversy is the order of the day. Melk Die Heilige Koeie comprises of 34 critical essays about everything relevant today. It is honest, rousing and hilarious. Without prejudice, but a tonne of flair, Deon writes about gay marriage, selfies and the Guptas. The idea behind the book is to put together and dismantle facts in the age of ignorance. To Deon, publishing Melk Die Heilige in English will remove a lot of the book's weight as its basis is formed around Afrikaner culture and the taboo elements that go along with it. For those who would enjoy reading Deon's writing in English, have a look at his travelogue Witboy In Africa (which features jaw dropping stories about his travels through Africa).

Since the book's release in December 2016 it has sold out of print twice, made its way to a best seller, and has driven a spike into the tractor tire of social media keyboard warriors who enjoy pulling facts out of thin air.

Melk Die Heilige Koeie is now available from all leading book stores, and is published in soft cover and ebook formats by NB Publishers.

Have you read Deon's new book? Let us know what you think in the comments section below. Sharing is caring so make the writer of this article happy by spreading this piece far and wide.