There’s a reason why the Distong National Museum of Military History has a 93% rating of “Very Good” and above! It is an absolute treasure trove of military-related journals, weapons and photographs from a number of wars in South African history.

Formerly known as the South African Museum of Military History and located on 80ha in the leafy suburb of Saxonwold, the museum prides itself on its enormous variety of war memorabilia, both (very) large and small. In essence, it aims to commemorate and pay homage to South Africans that have died fighting in and for their country. It is both fascinating and strangely emotional to walk through the various halls and see the enormous variety of weapons, clothing, medals, planes, books, journals, and helmets.

We were completely taken aback by the collection of fighter planes, tanks and even a submarine – not what we were expecting at all! Not to mention the weaponry on display, including machine guns, hand guns, magazine-fed rifles – it is a spectacular display of weapons used in the past, and quite sobering to think of the many lives that were lost as a result.

There is also a fascinating section devoted to those that resisted war – the Rebellion of 1914, Ossewa Brandwag and End Subscription Campaign. There are even items from Umkhonto weSizwe – a collection the museum is looking to enhance and increase as more items are donated.

It is one of those places that make you completely lose track of time, and so much bigger than we had anticipated. We also really enjoyed the The War Store that sells a fascinating (and sometimes disturbing) selection of military items, and Vargas Café that sells astonishingly good coffee and other refreshments.

The museum is also on the Green Line of the Hop-On-Hop-Off Sightseeing bus – a great excuse to give that a try, if you haven’t already. We suggest budgeting at least two hours at the museum, but ended up staying a lot longer!

KIDS’ RATING: 7/10. “It was really interesting, Mom. I just wish we could have played with some of the stuff!"

Hours: Daily from 09:00 to 16:30 (excluding Good Friday, Christmas Day and the first Sunday in September when the Jazz on the Lake concert is held at Zoo Lake). 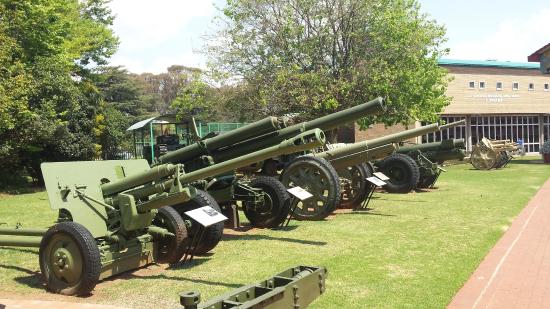