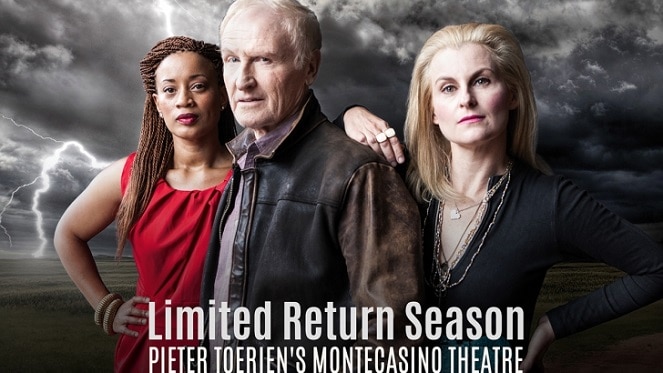 Paul Slabolepszy’s Suddenly The Storm thunders into the Pieter Toerien Theatre at Montecasino this March. This highly acclaimed award-winning play, returns for a limited three-week season in Joburg after its world premiere at the Market Theatre in 2016.

Suddenly The Storm has been described as one of the most powerful South African plays since the birth of democracy. Set in contemporary South Africa, on Johannesburg’s East Rand, the play poses the question of whether the wounds of the past can ever really be healed.

The action takes place at the home of an ageing ex-cop (Dwayne) and his much younger wife (Shanell). Combative, volatile, constantly on the verge of exploding, they are two halves of a white South African working-class couple, living an uneasy truce as they struggle with the day-to-day trials of scraping together a living and dreaming competing dreams.

Beneath Dwayne’s angry, violent exterior lies the heartbreak that governs his attitude to life. He is a man in mourning. Shanell believes his current level of despair was sparked by the death of his childhood friend and recent work partner, Jonas, but the source of his mourning and anger lies much further back.

When suddenly, a storm approaches, it’s not Dwayne or Shanell expect. Enter the elegant Namhla Gumede, born on 16 June 1976. Seeking answers to questions that have remained buried for 40 long years, her arrival reveals long hidden truths.

Suddenly The Storm was initially launched to coincide with the 40th Anniversary of the 1976 Soweto Uprisings. What begins as a smoldering dark comedy, suddenly turns into a roller-coaster ride of startling revelations, of rage and recrimination, before the storm finally breaks.

Paul Slabolepszy needs no introduction; having written more than thirty-five plays as well as radio, television and film scripts over a 50 year career. His many plays include Saturday Night at the Palace; Mooi Street Moves, Boo to the Moon, Making like America, Smallholding, Braait Laaities, Pale Natives, My Low-Fat Almost Italian Wedding, the multi-award-winning The Return of Elvis du Pisanie and Heel Against the Head (with the inimitable Bill Flynn as Tjokkie).

Slabolepszy’s theatre is the kind that throws up a whirlwind of mixed emotions – greed, love, loss and healing. Touching on distinctly South African topics that make this country so rich and rewarding for those who can brave its storms. Suddenly the Storm is directed by Bobby Heaney and features Renate Stuurman (as Namhla), Charmaine Weir-Smith (as Shanell) and Paul Slabolepszy (as Dwayne). Expect powerful acting, inspired writing and incisive direction, promising to make this production a truly memorable event.

It’s a terribly moving play and the message of optimism comes at a time when we are all foundering. While it’s a very real play, so utterly real, it’s highly entertaining.

What Is It? For all the single people out there listen up! Do join in on this incredible event and......