Est. Reading: 3 minutes
Ford was kind enough to let us test the all-new 2017 Ford Fiesta... we are quite impressed. Here's why. 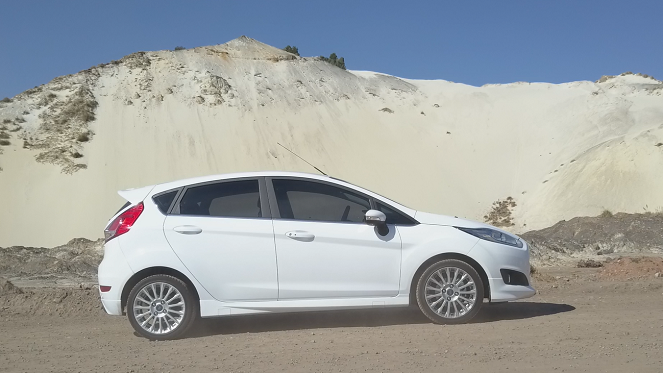 Every now and then a car comes along that just hits the spot. Low fuel economy, creature comforts and a bit of pull when you put your foot down. This brings us to the brand spanking new 2017 Ford Fiesta. It's a good-looking car built for city living. The thing zips around corners, doesn't use up all the fuel (and drain your pocket) when it's idling in gridlock traffic, and comes with enough cup holders to handle a massive order from McDonald's... take my word for it, you can tell a lot about a car by its cup holders. But is the all-new Ford Fiesta worth its base model price tag of "only R189 000"?

I wouldn't know, because Ford hooked me up with the 1.0 EcoBoost Power Shift Titanium. Priced at R274 900, the model I drove comes kitted out with seat warmers, leather seats and Ford's Sync 3.5 in-car entertainment system. Sync 3.5 is a bit of a big deal. You can control your phone through an array of buttons on the steering wheel and certain functions can be activated through voice command (such as dialling numbers in your phone book, etc.) Needless to say, this little car comes with a big sound system – one of my favourite features in this rendition of the ever-popular Fiesta (over 16 million units sold since 1976). The radio was put together in partnership with Sony, so you know it can blast Michael Jackson's Billy Jean at full volume without even breaking a sweat. While the car looks similar to previous models on the outside, most of the redesign has been done inside the 2017 rendition. The outgoing Fiesta needed a more vogue interior to accompany its exterior. Moving to the back, there is ample leg room though it should be noted that taller folk will have a bit of a problem as the roof arches to the back to follow the shape of the car.

Before we take it for a spin, let's talk about what's wrong with the thing. Not that big a deal, but the boot has got that lip at the bottom, which makes it much harder to load heavier items into the hatch. But to be fair, you're not going to buy a Ford Fiesta to haul freight around town, are you? Though it's not a hectic issue, it's an annoyance nonetheless. With the tank full and the engine switched on (at the push of a button, by the way), we took it through the great city of Johannesburg. It handles well, there's minimal roll around corners and its sleek look fits in with the likes of the hipsters in the Maboneng Precinct – the 16" alloy wheels match the city's ruggedness for sure.  The 1.0 EcoBoost Power Shift Titanium comes with an automatic gearbox which can be flipped into sport mode and gears can then be shifted manually with up and down buttons on the side of the gear knob. The engine itself is a thing of beauty. Its award-winning design ensures more bang for you buck as the 1 litre DOHC (Double Over Head Cam) engine is combined with a turbo charger, which you can feel when you put your foot down. In fact, since the EcoBoost's launch, car manufacturers have been coupling smaller displacement engines with turbo chargers.

Anyway, according to Ford, this model averages 4.9l per 100 Km but lowest we got it was 5.9l/km on the open road between Johannesburg and Potchefstroom while in the city it was guzzling a  constant 7l/km. Keep in mind that the model we drove is an automatic transmission and autos are way heavier on petrol.

All in all, the Ford Fiesta 1.0 EcoBoost Power Shift Titanium is a rocking car and comes highly recommended but... that price tag. Whether it's worth it or not depends your bank balance. If you've got the cash then this car is the one for you for sure. Climb the Stairway To Heaven at the Westcliff Stairs