Est. Reading: 2 minutes
Rosebank will see the Oxford Parks Precinct gradually be built over the course of the next handful of years. Here's what Joburgers can expect from all the commotion. 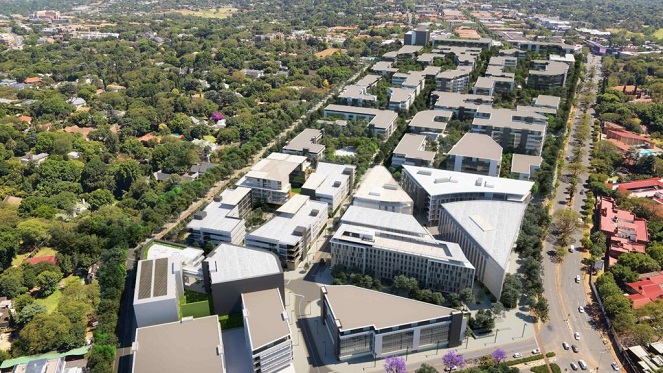 Across the road from the Zone @ Rosebank, next to the Gautrain station, and where the old Times Media building used to be, a major development is taking place. A 300 000 m2 section of Rosebank along Oxford Road will become the area's new mixed-use space.

Spearheaded by Intaprop (the developers behind Sloane Precinct in Bryanston), the Oxford Parks development officially kicked off construction in November 2017. The development will be built to Green Star standards (which you can read more about in our new Discovery building article). The first phase - with a contractual completion date of November 2018 -  will comprise three office blocks and a hotel as well as retail and restaurants on the ground floor. This will take an approximate 32 000m2 dent out of the proposed 200 000 m2  office and retail space. The residual 100 000 will be dedicated to residential use. While the total development cost has not been published, it is expected to be a multi-billion rand development. The completed precinct will be within walking distance of Rosebank retail, hotels, medical facilities, and schools. The development is expected to stretch between Bompas Road and Jellicoe Road in Dunkeld, creating the divide between Rosebank's CBD and Illovo.The The Oxford Parks Precinct has been compared to similar precincts in the area, mimicking a style reminiscent of the nearby Melrose Arch – an open space ‘lifestyle’ project that brings together commercial and retail space, all around a ‘pedestrian friendly’ environment. “Commercial office space will be built to a P Grade standard to reach a minimum of a 4 Star Green Star rating. The precinct will be managed privately by the owners association,” Intaprop said. As of the date of writing, our sources could not find out if a managing agent for the residential property has been appointed or shortlisted.

Watch this space! We will be covering this development as it expands. Living At The Eye of Africa Golf & Residential Estate