Est. Reading: 3 minutes
Based in Braamfontein, Kaizen Parkour uses parkour and free running to make the world a better place, one front-flip at a time. 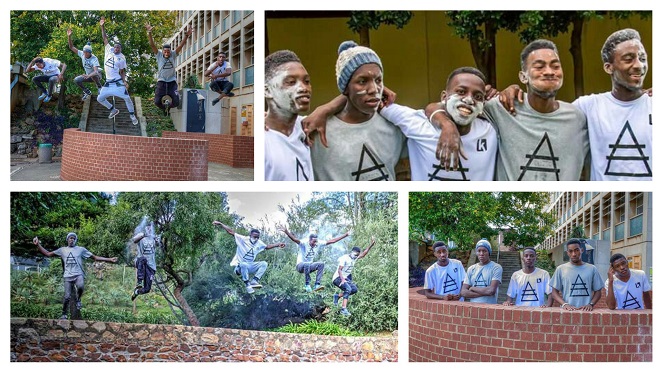 Genius all over the world stands hand in hand, and one shock of recognition runs the whole circle round. - Herman Melville

In recent time parkour has taken Joburg by storm. The leaders in the local movement can be found running the streets of Berea, Yoeville, and Braamfontein at any given time. Gilbert Gizo and the Kaizen Parkour crew are known to be very active in the community and have organised parkour jams with other Joburg crews, Wowed the crowds at disadvantaged schools and informal settlements, and kicked up more than their fair share of dust in Joburg.

"We started doing Parkour in 2013," says Gilbert,  "Silus Reed, Simon Ndovie, and I started training before any other member in Kaizen Parkour were introduced to Parkour." Since the group's inception they have grown into a team five. Before the guys were spotted back-flipping stairs at WITS or jumping out of trees shaded by Ponte City,  they watched a French action film called District 13, in which the father of parkour, David Belle played a roll. This inspired the guys to go for parkour lessons at WITS, soon honing their skills into what they can do today.

There's one thing we need to get out of the way before we continue. Parkour is free running but free running is not parkour (have a look at the beautiful sketch below to see what the difference is between the two similar disciplines). With that comes a brief history of parkour, of course. The "extreme" (how I loath that word) sport has its roots in military training where French foot soldiers were taught to get from A to B by swinging, climbing, jumping, and vaulting obstacles. This made its way down the ranks to Raymond Belle (David's father) who passed the training onto his son. David paired this set skill with his love for gymnastics and athletics. Just like being able to ollie a skateboard, parkour's core move sounds simple but takes practice. If you can't jump then perhaps you should consider unicycle hockey (read more about that in my basketball in Joburg article... strange, I know). Fortunately for Joburg, the guys from Kaizen Parkour can jump. In fact they can do more than just jump. I'd go so far as to say that they represent the heart of the city: pacing like a group of ninja cheetahs chasing their dreams through the dirty streets. Their blood laced with gold and seeing no end in sight. Kaizen Parkour is also known for hosting an annual parkour event in the inner city called Black Jam which has seen its third year celebrated during Q1 2018. The idea behind Black Jam is to unite parkour crews and fanatics in Joburg and to grow the scene together. With that said, Kaizen Parkour is also known to collaborate with other Joburg crews, such as those based in Sandton, and often do weekend parkour runs all over the place.

In conclusion, Kaizen Parkour is only a single example of how much talent this city has to offer, and when that talent is used for good it can have a ripple effect that can be felt the country over. This article is written as the crew embark on a journey to introduce improvised school children of the coolness and benefit of parkour.