Est. Reading: 4 minutes
Nando’s has been investing in creativity in Southern Africa for many years because they are passionate about nurturing and showcasing Southern African creative talent. Their partnership with Basha Uhuru is the ideal platform to help upskill emerging creatives and to showcase local talent in a creative collision. And this year's Basha Uhuru is a celebration of 25 years of creative freedom of the youth of South Africa. 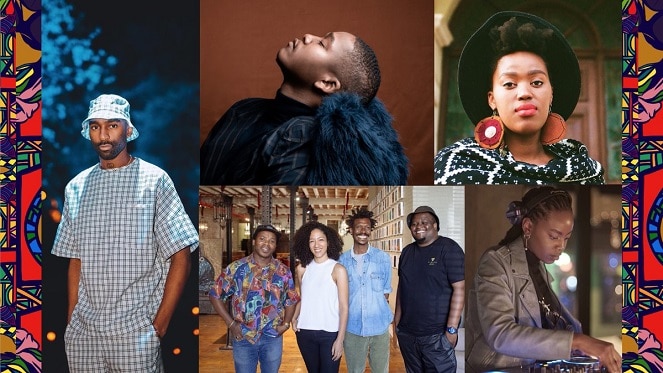 Nando's and Basha Uhuru came together on this one. Nando's firing up Johannesburg's hottest gathering, the Basha Uhuru Freedom festival for the third year running and they are bringing the heat with some of Mzansi's best art, design and music talent. There are two main events they are involved in:

And Here Are The Creatives!

We have featured a few of the creatives on the programme, to give you a glimpse of what each of them do and if you ask me they are the G.O.A.T and I am fan-girling hard!

Born in Belhar - Cape Town, Pretorius was exposed to art at a young age. Her art has gone far and beyond as she has showcased her urban inspired artwork in New York in 2014, also being one of the seven artists chosen to participate in a New York Mission in association with the South African Government Trade and Industry Department. Robyn is inspired by her everyday surroundings and the people that cross her path. As a photorealist, she is drawn to the detail of what she paints. Through her art, she has made it a mission to investigate the connections existing between the environment human beings live in and their identities. Fun fact: Robyn became the youngest cartoonist for the Sunday Times in 2001, aged 13.

Mpho Vackier is the creative talent behind TheUrbanative, a contemporary African furniture and product design company in SA. Her furniture and products are differentiated by the juxtaposition of abstracted African cultural graphic, motifs, lines, forms and inspiration with the functionality, look and feel of modern, midcentury and Bauhaus furniture silhouettes guided by the philosophies of craft, collaboration, authenticity and design evolution for the urban native. All of the products are designed and manufactured in South Africa. On the day Mpho will be presenting a session on design as a problem-solving process, looking at the ability to work withing constraints presented by material limitations and manufacturing processes.

Financial advice is everything we need as the youth, or anyone for that matter. So, never fear when Thokoza Mjo is near, because she is an investment analyst by profession, who believes in an Africa with economically active youth. In 2014 she founded Beyond the Lemonade Stand with the mission to partner with families in developing a generation that believes they are capable of achieving their dreams and not just believes but acts on it, too. Thokoza is an entrepreneur who holds an honours degree in finance from the University of Pretoria, so we can safely say you're in good hands. She will be presenting a workshop on "Having a positive mindset" at the Basha Bacha Creative Uprising creative conference, which will provide emerging designers with the tool and mindset required to succeed in the South African design industry.

Amaya Delmas is a French screenprinter and graphic designer based in Victoria Yards, Lorrentzville. Who after completing her Masters in Central St Martins, London, worked in several advertising agencies in Paris. A few years later, life brought her to Johannesburg, where she opened her design practise alongside a small silkscreen workshop. Amaya will be running the stencil- and print-making workshop at Basha Bacha Creative Uprising creative conference. So, be on the look out for that!

And lastly but by no means least, her music is on everyone's playlist (marked as favourite, for sure) right now and we are here for it! Msaki who is a composer and singer-songwriter from East Londong, in the Eastern Cape. Creates sounds that combines a soulful folk with symphonic movements. Her Xhosa lyrics and African poly-rhythms with portals of sincere improvisations are just amazing. Her raw delivery disrupts your senses, leaving you moved and quietly longing for more as she weaves subtle tales of love, loss, home, revolution and hope. This year at Basha, Msaki will be performing on the main stage at the Basha Uhuru Sounds of Freedom music festival. So, I wouldn't want to miss it if I were you.

What To Look Forward To At Basha Uhuru

There's so much to look forward to. Giving you a Music Festival, in which they will be featuring the best musicians; Riky Rick, Khuli Chana, Langa Mavuso, Denise Marz, Thebe, Msaki and to check out the full line up click here! The line up will have you begging for more. As mentioned before there will be a Basha Bacha Creative Summit you're definitely in for more than just your ordinary festival, Basha can never be ordinary. To make sure you're getting the full experience you'll also indulge in the finest local food, drink, art and craft producers in the area at the Makers Market. There also will be a Film Screening and an Art & Design Exhibition.