Est. Reading: 2 minutes
Jonathan Rae was destined for great things before his world was turned upside down. He was a mechanical engineering student and has always dreamed of playing golf on a professional level. He was planning on turning professional in April 2017, however the course of his life didn’t agree with his plan. 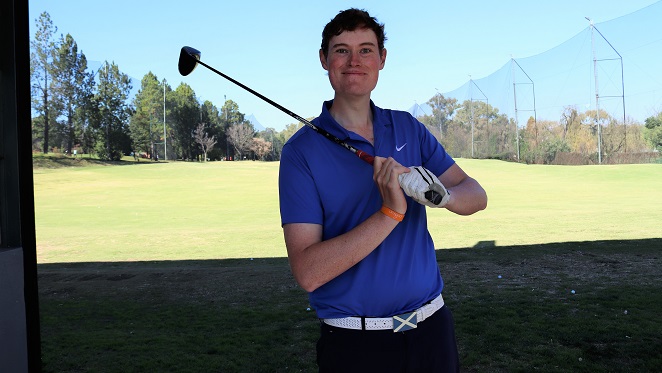 In early May 2017, Jonathan was diagnosed with Wilson’s Disease, a rare genetic disorder that causes copper poisoning in the body, affecting 1 in 30 000 people globally. Those affected display neurological symptoms similar to Parkinson’s Disease, such as trouble speaking and tremors. Unfortunately, this affected his studies and he was forced to leave university after completing only two years of his engineering degree.

Jonathan started playing golf at the age of 13. He started with a handicap of 30 and worked his way down to +2. He has competed in the SA Open Qualifiers three times and managed to place in the top 200 South African Amateur Rankings. Jonathan says his biggest challenge at the moment is making it through everyday life. Speaking properly, grooming on a daily basis, and often relying on his girlfriend to feed him are just a few of the difficulties he faces. “It basically turned my whole life around” says Jonathan. Before he was diagnosed with Wilson’s Disease, Jonathan was planning on kick-starting his professional golfing career by joining the Sunshine Tour and getting experience there for about two years before attempting the European Tour Q-School. When Jonathan was first diagnosed, he struggled to believe it was true. He thought it must be a joke. He says that he didn’t know what to expect and avoided researching the disease for the first few months because he didn’t want the reality to hit. “When I started to come to terms with what I’ve got, I basically had to decide whether I wanted to fight it or just lie down and die”, says Jonathan. The thought of his future, his girlfriend and how he is going to make a living one day keeps Jonathan motivated. Due to his inability to write, he has been forced to quit his studies and only focus on golf for the time being.  Fortunately, Jonathan has found a way to play golf despite his shaking hands, one of the side effects of Wilson’s Disease. “It only really affects your short game. The long game is more strength than finesse” he says.

Jonathan views golf as the best platform to give back to charities and underprivileged children, and plans on raising awareness of his disease through the wonderful game of golf. He says, “The disease has taught me not to take anything for granted. At my last competitive round of golf, I shot a 68. Three months later I couldn’t even open a bottle.” Jonathan joined Randpark Club in April 2018 and views it as one of the most well looked after courses in Gauteng. The Club has welcomed Jonathan with open arms and supports him in his journey going forward. “We are delighted to have Jonathan as a member of our club and will provide

him with all the support he may need to achieve his goals and dreams” says Francois Swart, GM of Randpark. Jonathan says, “I think the best way to describe Randpark would be family. Any other golf course I’ve been to I’ve felt alone and isolated, but here everyone is welcoming and literally treats me like family”.