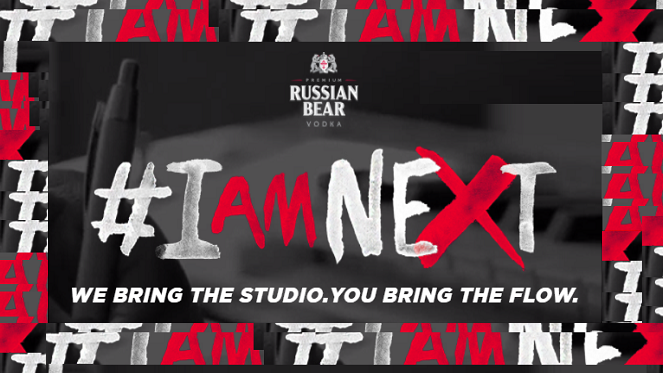 The vodka that celebrates the creativity in urban culture, Russian Bear, is taking its #IAMNEXT campaign to the next level, by calling all rappers with talent based in Gauteng to bring their flow to Russian Bear’s custom designed mobile recording studio.

Russian Bear’s #IAMNEXT campaign is back! And this time, they’re taking it to the next level. The vodka that ignites urban cool is calling on aspiring hip hop artists to enter this year’s competition and drop their fiercest lyrics. The prize? A chance of scoring a collab single with award-winning South African rapper, Kid X, plus a music video powered by MTV Base.
“When Russian Bear approached me, I could not let this opportunity pass by. I followed the #IAMNEXT campaign last year with Kwesta, and was inspired by the opportunities that the campaign provided for up-and-coming artists in South African communities. I can’t wait to go on this journey with the fans and look forward to us taking #IAMNEXT to the next level together,” says Kid X.
Russian Bear will once again be bringing their dope mobile recording studio and Raplyf’s beat maker/ producer, Gobi Beast, to your hood to collect entries. So, if you know you have next level bars that stand out from the rest, all you have to do is purchase a bottle of Russian Bear 750ml or 1litre, head over to the #IAMNEXT website www.russianbear.co.za, register your barcode and book your recording slot. If you can’t pre-register, no stress, there will be four slots open at each event on a first come, first serve basis.
“Last year’s #IAMNEXT campaign was highly successful, unearthing a new wave of hip hop talent and helping Caleb Heynes to launch his music career. We hope that fans are ready and inspired to level up this year and show us what they’ve got. We look forward to embarking on this journey once again and discovering the best of what the SA hip hop scene has to offer.” says Russian Bear Brand Manager, Simone Burns.
The Russian Bear mobile recording studio will make its first stop in the Western Cape in May and will then move on to the Eastern Cape, Kwazulu-Natal and end it’s tour in the city of gold, Gauteng, in July.
“We encourage fans to stay tuned to our social media pages for all the latest updates and Kid X performances. You never know, we may have something else in store for you.” adds Burns.
She concludes: “If you have what it takes, bring the flow and we’ll bring the studio.”
Russian Bear is Not for Sale to Persons under the Age of 18. Please Enjoy Responsibly.