There’s only one Fawlty Towers – and there’s no other married couple quite like Basil and Sybil! Confirmed Fawlty Towers fans since the 70s, Annie Robinson and Mark Mulder perform their two-hander Fawlty Flowers at the Auto & General Theatre this October. 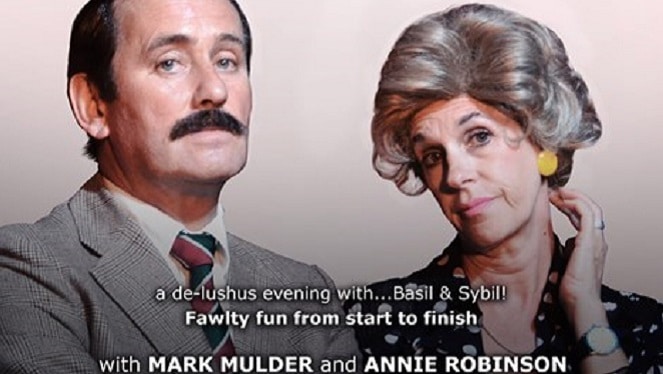 Fawlty Towers was a British television sitcom broadcast between 1975 and 1979. Starring the ever hilarious John Cleese as the inept and slightly out-of-his-head English hotel manager, Basil Fawty. Voted the best British TV series of all time, Fawlty Towers  has fans worldwide.

Among these fans are South African comedians and theatre professionals Annie Robinson and Mark Mulder. To celebrate the Fawtly madness they love so much, these two seasoned actors bring you Fawlty Flowers! at the Auto & General Theatre on the Square. Devised and directed by Paul Spence, Fawlty Flowers! is pure, delicious Fawlty fun from first word to last. The much put-upon Basil, bossy Sybil, eccentric waiter Manuel and pretty Polly are all there. You as the audience will suddenly get the distinct feeling that you are a guest in the dining room of the infamous Torquay hotel. Don’t miss it!

Tickets cost R75 per person and may be purchased online via the Computicket website.

Visit the Auto & General Theatre on the Square’s website for further details. Also give them a follow on social media for show dates and times:

Contact the theatre Box Office on 011 883 8606 or via email at theatreonthesquare@gmail.com

What Is It? Poetry speaks to the hearts of those who are willing to listen and create, and in that......