Est. Reading: 3 minutes
Did you know that Joburg is the largest man-made urban forest in the world? You don't have to travel very far to bump into one of the city's many parks and nature reserves. But if you're truly looking to escape the inner city smog without having to leave the province, The Wilds is ideal for you. Situated right within the heart of Houghton, this urban jungle is one of our top spots for hiking, dog walking and outdoor adventure. Take a break from being cooped up inside this winter, and get on your walking shoes because there is a ton to be explored here! 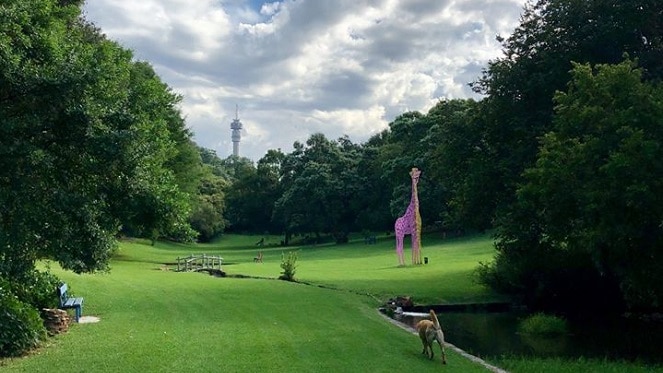 The Wilds is a 16 hectare nature reserve nestled on the border between Killarney and Upper Houghton. Opened to the public in the 1930s, this serene landscape of koppies, foot trails and natural waterfalls is a wonder to behold. However its reputation came under fire in the early 2000s as the park became heavily overgrown. Many runners, hikers and tourists kept a firm distance from the park, frightened by rumours of rampant crime. The fate of The Wilds seemed equal to many other inner city parks until one man stepped up to make a change. Artist James Delaney set out to clear out The Wilds, determined to bring this lush area back to life and to restore its reputation to its former glory. Photo sourced from Friends of The Wilds on Facebook.

Between 2013 to 2018, Delaney and a group of volunteers tirelessly worked to clean up the park. They removed tons of overgrown plant life in this time, opening up the foot trails and hiking paths to eager explorers. Delaney and his team have maintained the indigenous flora here too, celebrating its history and meaning as one of the city's best preserved nature parks. An array of indigenous plants and flowers bloom here year round, including the glorious red aloes that peak their heads over the koppies come wintertime.

When Johannesburg Consolodated Investment Company developed the suburb of Houghton in the 1920s, they left the area now known as The Wilds untouched. Then in 1936 the Empire Exhibition came to town in celebration of Johannesburg's jubilee. After the exhibition thousands of indigenous plants were donated to develop The Wilds as a park. Delaney believes that this spirit of public intervention is vital to keeping The Wilds thriving. He hosts monthly clean ups with community volunteers to keep the park in top condition. So far they've managed to clean up most of the overgrown western section of The Wilds. With their sights set on the eastern section next, Delaney and his volunteers show no signs of slowing down.

It is this spirit of community that led to the Delaney's Mandela Day Project at The Wilds. In July 2017, Delaney undertook a massive art project to bring back visitors to The Wilds. He had noticed that despite his years of dedication to cleaning up the park, people were still nervous to visit it. In response, he created 67 owl sculptures to be displayed around The Wilds. These owls were hung high in the forests of the reserve, acting as a draw card for tourists and local nature enthusiasts. But Delaney didn't stop there. He has continued the project, crafting an array of critters to decorate the park. On your next visit to the park see how many sculpted owls, bush babies, monkeys and buck you can spot on your walkabouts. James Delaney and his dog Pablo pose with one of his sculptures at The Wilds. Photo sourced from Friends of The Wilds on Facebook.

Other attractions at The Wilds:

Under level 3 lockdown restrictions, The Wilds remains closed to the public. Follow Friends of The Wilds on Facebook to keep up to date with opening dates and Delaney's community clean up initiatives at the park.

Visit www.jhbcityparks.com to find out more about The Wilds and Joburg's many other city parks.

The main entrance to the reserve is located on Houghton Drive.

Have you visited The Wilds? Let us know about your experience in the comments below!