Home » Catch The Union Bar Before It’s Too Late

Catch The Union Bar Before It's Too Late

Est. Reading: 2 minutes
Apparently the Union Bar in Ilovo serves the best cocktails in Jozi... we think you should go try it out. 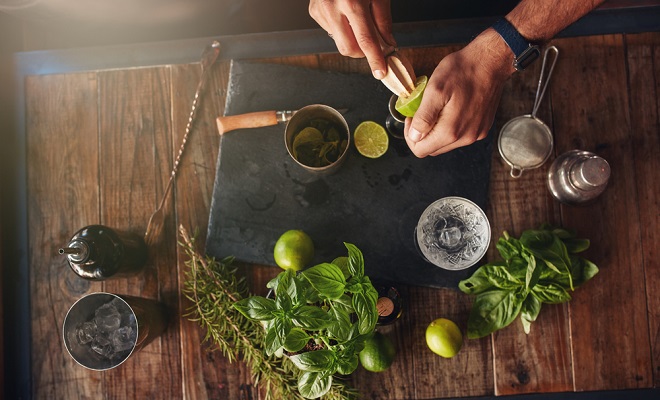 Before experiencing it for myself, I've heard at least a dozen people tell me about the most amazing cocktails served at the Union Bar. "It's a bit pricey but once you taste the cocktails you'll understand why." Off the bat, I am not a cocktail kind of guy. Give me a good bourbon in a tumbler glass brimmed with ice and we're good... well, that was until I scored an invite to review the Union Bar.

So, the the whole pop-up restaurant and bar scene has exploded. With that said, the lovely folks over at J&B - who make a mean drinking whisky, by the way - decided to get in on the action with their very own pop-up bar, called the Union Bar. Currently the Union Bar is situated in Illovo... more accurately, it can be found in the Norman Goodfellow's dispatch warehouse at 18 Chaplin Road right around the corner from the GBC.

My visit to the Union Bar was a bit... different. I was invited, along with five friends, to learn how to mix cocktails. Now, as a guy who watches rugby, eats biltong and sweats whisky, my approach to making frilly drinks would be to mix five shots of J&B with sprite and finish it off with a curly straw. Sounds great, doesn't it? Well, needless to say I learned that there's a bit more creating the best cocktails in Johannesburg than that. There's this thing called the golden ratio. You need to start with an alcoholic base, such as Scotch whisky. Then a simple syrup and finally something lengthen the drink out - such as ginger ale or tonic water. According to the Union Bar's chief mixologist, this golden ratio is 2:1:1. Creating cocktails is a balancing act, and not just chugging stuff into a high ball glass with a tiny umbrella like I thought it was.

Anyway, the cocktails at the Union Bar are pretty tasty and worth your time and effort. I managed to "critique" my way through three or four of their creations and enjoyed every one of them. The vibe is pretty cool and a great place to shake your behind to some good music, though it must be said that it gets packed quite quockly - which is a good thing because it adds to the party vibe they've been going for. Another cool thing to do at the Union Bar, is to go celebrity watching. It's the kind of place where dudes like Tresor enjoy a mix of good booze and a lekker atmosphere.  The Union Bar will be housed at 18 Chaplin Road, Illovo until 9 September 2017. Note that entrance is R50 per person but you can bypass this by registering on the Union Bar website.

In closing, if it's good enough to convert a beer drinker such as myself then you'll dig it to bits for sure.