Home » Biker Mice From The Vaal

Biker Mice From The Vaal

Est. Reading: 2 minutes
The tiny area of Deneysville village recently popped onto my radar. Only a half hour from Emerald Casino and based around the Vaal dam one would wonder what could be so interesting about Deneysville. 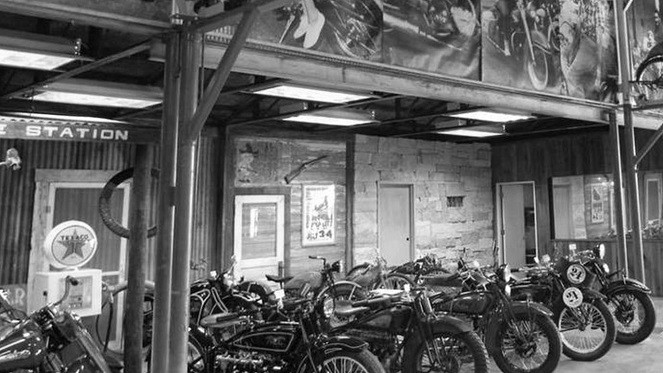 Well for any avid bikers (and non-bikers looking to be informed) there is the Motorbike Museum which opened in 2009. Situated on the premises of Lake Avenue Inn, this wonder of man-made machines displays historical motorcycles, some of which cannot be found elsewhere in the world. It’s the first of its kind and consists of unique pre-1975 bikes ranging from racing bikes to vintage beauties and even an obscure Triumph that is painted like a dog. (At least I think that’s what it was...)

John Boswell, a motorcycle devotee, brought this all into fruition. He decided that his valuable collection of vintage and classic motorcycles should be shared with the world. Did I mention that they are all in mint condition and rin good running order?

The R3.5 million museum, commemorates renowned Southern African as well as Northern and Southern Rhodesian race champions starting from way back when. Maybe bikes are a bit swankier than I thought? There is even a signed wall of fame and though I couldn’t recognise any of the names, I could get the feeling of the pride and honour bestowed upon these riders.

In previous years celebrations were hosted for various racers and there were opportunities for journos to test ride the bikes. I would have remained with two feet firmly planted on the ground however as I am a firm believer I should only ever be transported in good and solid four-wheeled moving objects. A terrifying scooter accident left me with an ugly birthmark-like scar on my knee. That will teach me for riding in shorts...

The Motorbike Museum is also a lovely breakfast run destination for bikers. Not only is it a mere 50m from the Vaal dam itself, but the Lake Avenue Inn offers a “biker’s breakfast” and an a la carte menu from which you can make your selection upon arrival.

Have you been to the motorcycle museum before? Let us know all about it in the comments section below. Sharing is caring so show this to your buddy who is obsessed with motorcycles.

2 comments on “Biker Mice From The Vaal” Travel Back In Time In Joburg