We took a spin through the most beautiful restaurant in town and decided to delve a little deeper into what exactly this David Higgs masterpiece is made of. 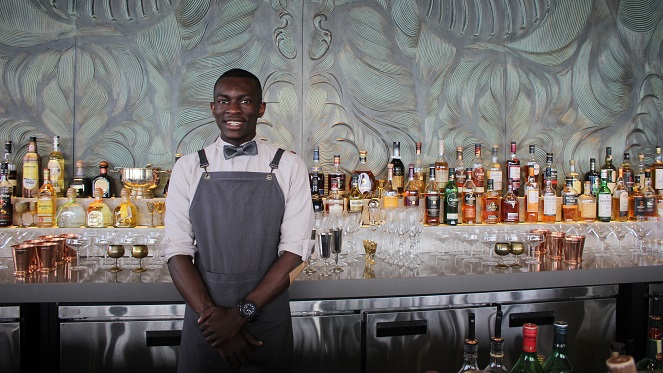 The team was recently invited to experience Joburg’s latest tongue-waggler restaurant, Marble, in the new Trumpet building on the Keyes art mile. Having read mixed reviews of this much-talked about establishment, we were anxious to see what all the fuss was about.

We were warmly greeted at the breathtaking foyer by co-owner Gary Keriacou and his bevy of beautiful people. First impressions included words like “WOW” and “I hope the food is as good as the place looks” and “dammit I wish I had put on a smarter shirt”. We received an apology for master-chef, David Higgs’ absence, as he was out in the countryside at a supplier reviewing the week’s meat order. As much as it is common for international chefs to go off to the farm to get in touch with their produce, it seems rather novel and uncommon in South Africa. It was reassuring, however, that the renowned head chef was involved with the produce on that level. If you weren’t aware, the restaurant offers an open-flame experience and focuses on meat as its specialty dish.

Once seated, it is abundantly evident that Gary and his team covered every single detail of the restaurant. The acoustics of the restaurant are incredible and were developed by an expert sound engineer to ensure that the familiar diner buzz was present but that one also had complete privacy, almost a muted cocoon around the immediate table area.

Placed next to the imported open-fire grill, we were thrilled with the level of theatre and “cheffery” we witnessed. A dance of six grillers was taking place in front of our very eyes and patrons are lucky to be able to watch these evolving maestros demonstrate their craft. Our hosts were quick to point out the complexity of cooking on an open flame versus cooking on a gas grill where temperatures are more consistent. “The guys carefully monitor the meat to make sure that they are following the hotspots on the grill; it’s a learning curve because we don’t use gas,” said Keriacou.

Upon further investigation, the table itself revealed other little touches to enhance the dining experience. The cutlery was aged to give the metal a certain patina. The serviettes all feature a little buttonhole that businessmen can use to fasten the serviettes to their shirts without having to tuck them in. The butter, oh my word, the butter, was fantastic… probably the best we had tasted in ages (or ever? Can we recommend a restaurant based on its butter alone? I vote yes). The bread served was soft, delicious and fresh, gently charred with a hint of a kiss from the open flame.

Our starter and main orders were taken at the same time so that the starters can be served and the meat prepared and rested, before it reaches the table.

We ordered the salted kudu and prawn starters and agreed that enough cannot be said about the kudu dish. Salty, gamy and tender, the meat was the perfect accompaniment to the soft-boiled egg and roasted endive leaves. For mains, we had the fillet and the pork neck, both well prepared and generously portioned. It is at this point that we feel it fair to mention that Marble is not a fine-dining restaurant in the sense that you’ll get a smidgen of food smeared on your plate. Yes, the interiors and overall setting feels incredibly glamorous and high-end, however, the team prides themselves on the fact that they offer carefully selected produce, prepared lovingly on an open flame, in generous portions. We particularly loved the gravy with which the fillet was served and the meat was cooked to perfection, so clearly they’ve got their grilling down to a fine art.

One example of the constantly evolving nature of their business is the fact that Chef Higgs decided against grain-fed beef after having tested it in their opening week because grain-fed beef has less fat or marbling on it, which makes it tough after being cooked on an open flame. It has subsequently been replaced with grass-fed beef, which contains more fat, making it juicier to eat.

I believe that Marble’s current mixed bag of reviews reflect a need for some education in terms of what patrons can expect to experience. Chef Higgs is synonymous with fine dining but this establishment does not offer finicky, dainty meals but rather robust, curated meals in which the proteins can be the hero. The venue is gorgeous, inspired by African high-design and would be at home as much in New York as it is in Rosebank. The menu and pricing echo the efforts taken by Chef Higgs to ensure that only the best produce comes through its doors.

Gary believes that the restaurant is in its “evolutionary” phases and that the kitchen, hosts and food offerings are constantly being reviewed and refined to try and attain a perfect product. If you believe that steak is synonymous with Spur, this place is not for you. This place is aimed at patrons who value a high quality and refined experience.

The metaphor that comes to mind is that all cars are cars but why do some then choose to drive a luxury car over more affordable cars that also get you from A to B? The answer is always because it’s not the same; the experience is elevated, the seats are more comfortable, the car is faster and people look at you differently. The same can be said for Marble: a steak is most certainly not just a steak here. You’ll taste the difference.

There’s an art and a spot of science as to how Marble prepares its food and has created its guest experience. I, for one, will continue to watch their evolution with much interest and know that in a city full of luxury cars, this establishment will thrive.

Have you been to Marble? Let us know in the comments section below. Sharing is caring so post this article to social media.

Travel Back In Time At Greensleeves Medieval Kingdom

Whether you’re looking for a venue for a birthday party, or you and your mates just want to tuck into......