Est. Reading: 2 minutes
Get your nerd on at Animeworx in Randburg, where a huge selection of comic book classics and collectors items await. 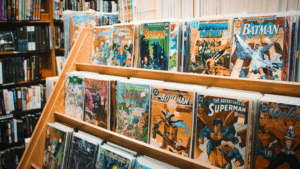 The first line in the trend of comic books or the ‘Golden Age’ as it is referred to by the fans, saw a newspaper publication throw all its weekly comic strips into a book and was therefore given the name comic book. The first actual publication to gather fame and a strong following was the 1936 ‘Action comics’ which saw Superman donning his blue suit and heaving a car through the air on the front cover.

The Golden Age was seen as the most powerful era in comics, with Superman heading up the roster and making way for many others including Spider-Man and the Fantastic Four, which many dubbed the Silver Age in that it had changed the primary style of comic books from a linear storyline to the more relaxed feel that was inherent in the Fantastic Four stories. Kids flocked out to corner cafés and bought their fix week after week, following storylines which have to this day reoccurred in pop culture with movies like X-Men, the Avengers, Batman vs Superman and more.

Experts would say that comic books have made their third comeback with the return of the Marvel Comics starting a studio with the sole intent of releasing old Marvel storylines. The response has been phenomenal. Fans have coined this era the ‘Iron Age’ and are once again lining up for a look at the original comics where their old favourite characters first came to life.

AnimeWorx (AWX) has answered the call, and you can get all your comic book needs at one convenient location – The Nexus, 21 Harley Street, Ferndale, Randburg. They have everything, from the cult classics (Superman, Fantastic Four and Batman) to the underground strips like Anita Blake: Vampire Hunter.

AWX has a friendly bunch of staff, always keen to chat about rumoured stock becoming available, and the merits of supernatural powers vs bio-mechanical suits (or something related). If there is a comic book aficionado in Joburg, he or she can be found skulking the many aisles at AWX on the weekends trying to find the missing link in their collection.

Join their club and get great discounts on books and other collectables. Embrace A Better Life With The Huawei Band

How Does Huawei Manage To Transform The Technology Business PayDay Software:Moving Your Business In The Right Direction