Cannabliss – The hilarious show that will tell you everything you want to know about dagga, but keep forgetting to ask. See Alyn Adams perform at Parker’s Comedy and Jive on Sunday, 8 September 2019. 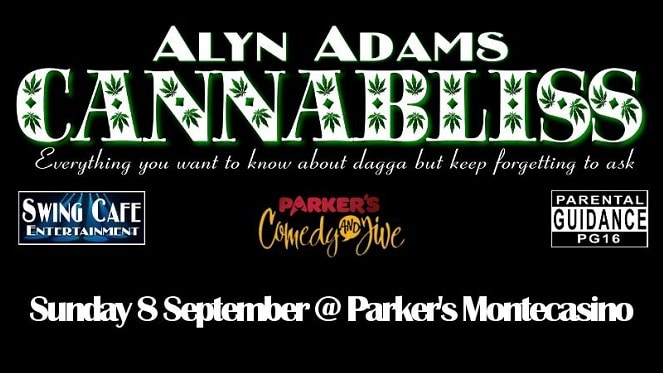 Cannabliss explores the many uses over the years to which humans have put cannabis – including the most obvious one. It’s a 10 000-year amble through history, stopping to smoke the flowers. Or, perhaps Cannabliss is a lecture with jokes, exploring hemp’s myriad industrial uses, from rope, textiles, and building material, to food, paper, bioplastics, biofuel and more.

There will be stoner jokes, too, of course (assuming Alyn remembers them all) – and a look at the medical research – but he hopes to convince even people who have no interest in ingesting weed that prohibition does more harm than good. ‘Are we really refusing to tackle rural poverty with a miracle crop because it makes some people giggle?’ he asks, rhetorically.

Don’t miss this hilarious look into the world of cannabis at Parker’s Comedy and Jive at Montecasino. It’s on for one night only, so don’t hesitate (or forget) to book your tickets!

Tickets cost R80 – R100 per person and may be purchased online via Quicket.

What Is It? Welcome the start of summer with a weekend trip to the lush bushveld of the Limpopo province.......