In the spirit of Heritage Month, we’ve put together a list of unique, cultural and raw South African storytelling films produced in South Africa. These Mzanzi movies are a must-see! Here are our top picks for locally produced films currently showing at Sandton City and Rosebank Ster-Kinekor. 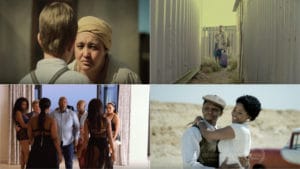 Back Of The Moon

The year is 1958 in Sophiatown. On the eve of his house being demolished, Badman, a street-savvy leader of the most powerful gang, has decided he is fighting for his home to the death. On the other side of Gerty street, the ever-so-beautiful torch singer, Eve Msomi, on the brink of an international career, is giving her last concert in the local hall before she travels to London.

Tomorrow, they will be forced to a desolate township, 15km out of the city. But fate thrusts the songstress, whom Badman has loved from a distance, into his orbit. And on the night of July 28 1958, Badman’s gang turns on them both.

Losing Lerato is a beautifully told South African action and thriller about a successful, young black man who takes matters into his own hands by kidnapping his daughter after life, the law and the woman he once loved separates him from his child. His actions put him on a collision course with the law, and he finds himself in a high-stakes hostage situation.

The year is 1981 and South Africa’s white minority government is embroiled in a conflict on the southern Angolan border. Like all white boys over the age of 16, Nicholas Van der Swart (Kai Luke Brummer) must complete two years of compulsory military service to defend the Apartheid regime. The threat of communism and “die swart gevaar” (the black danger) is at an all-time high. But that’s not the only danger Nicholas faces. He must survive the brutality of the army – something that becomes even more difficult when a connection is sparked between him and a fellow recruit.

This film is based on the memoir, ‘Moffie’, by Andre-Carl van der Merwe and tells the story of a conscript who embarks on his military service in 1981 in South Africa.

Jacob Mofokeng is a middle-aged businessman who has become accustomed to his routine, a life which includes his wife, daughter, his work and his fun. As a powerful CEO, with a big house, a successful spouse, a family and expensive recreational habits, Jacob feels like life will always be this easy.

Touch, who is no stranger to an opulent lifestyle, makes his acting and directorial debut in the movie. Sharing the news on Instagram, the media personality said:

“I want to share this amazing story with the world, this movie #Blessers addresses today’s societal misconceptions around slay queens and wealthy established men!”

Expect a whole lot of drama and laughter!

This timeless South African classic takes us back to the Karoo in the 1880s. Fiela Komoetie, a coloured woman living in the arid Karoo, finds a lost three-year-old white boy on her doorstep and takes him in, raising him as her own. After a decade in her care, Benjamin Komoetie is noticed by government officials and removed. After his forced removal, Benjamin is returned to live in the Knysna Forest with Elias and Barta Van Rooyen, a family of woodcutters who claim that he is theirs.

Separated by law and geography, Fiela and Benjamin spend the next decade trying to find each other while coming to terms with their individual identities.

This film is based on the bestselling 1985 novel, ‘Fiela Se Kind’, by Dalene Matthee. The novel was first adapted into a film in 1988 by director, Katinka Heyns, and featured iconic South African actress, Shaleen Surtie-Richards, as Fiela Komoetie.