Get ready for the return of cricketing action with 3TeamCricket, in partnership with Cricket South Africa. Expect a brand-new format of cricket, that’s a first-of-its-kind. 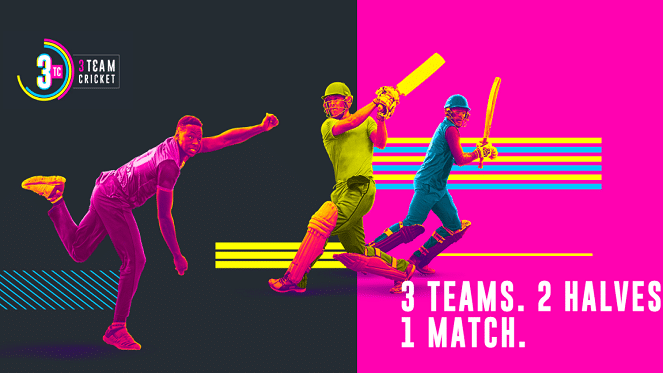 Cricket fans can celebrate the return of their favourite sport with the innovative and first-of-its-kind, 3TCricket, where three teams will play in a single match, competing for the inaugural Solidarity Cup.

Presented by RAIN, the Solidarity Cup will be the showcase event for the brand-new cricket format which sees 24 of South Africa’s top cricketers in three teams playing two halves in one match.

The Solidarity Cup will be the first live sport in South Africa since the lockdown was announced in March 2020 and will be broadcast on SuperSport.

Director of Cricket at Cricket South Africa, Graeme Smith believes that this new format will bring back the excitement of cricket. “We miss cricket, we miss the fans and we miss the players. Cricket is seen as a professional non-contact sport under government alert level three regulations and what better way to introduce the sport back to its fans than with a new format.”

Rain Chief Marketing Officer, Khaya Dlanga believes that 3TCricket will be an exciting new addition to the international calendar. “As a pioneer in the data-only mobile industry, we have an avid appreciation for innovation. At Rain we are ecstatic that some of the best players in South Africa will kick-start 3TCricket, which we are sure will be an inextricable part of the international cricket calendar in no time,” said Dlanga.

Takealot Eagles skipper, AB de Villiers believes that 3TCricket will be an incredible spectacle for the fans starved of cricket action. “It’s an amazing idea, and thanks so much to Cricket South Africa and Rain for working so hard to develop this new style of cricket. There are so few team sports in the world where you get to play more than one opponent in a single fixture and that is game changing! Also, what an incredible opportunity for the fans to see so many talented cricketers show their stuff in one game. I can’t wait.”

Mr Delivery Kites captain, Quinton De Kock explained that he’s excited to beat two teams at once in the 3TCricket model. “I’m really excited to be captaining the Kites, we have a great team and I think we can claim the gold. I’m even more excited about the new format, it’s going to be a lot of fun beating KG and AB on the same day.”

Proteas fast bowler and captain of the Kingfishers, sponsored by OUTsurance, Kagiso Rabada has been ruled out with a groin injury since late February 2020 and will make his return to cricket at the Solidarity Cup. “I look forward to playing alongside some of the fine gents of the game, with each of us bringing our own special flair. We have a great mixture of talent and I’m positive that we can walk away with the inaugural Solidarity Cup.”

Authorities in Hungary raise the alarm over payments to a two-month-old company. Zimbabwe’s main opposition coalition on Thursday condemned alleged......